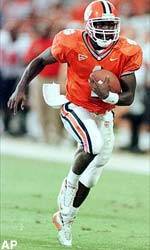 Clemson, SC – Woody Dantzler and 20th-ranked Clemson were unable to put up any big numbers in their season opener. That should not be a problem against Wofford on Saturday.

Dantzler had a relatively quiet game last Saturday, as the Tigers (1-0) opened the season with a sluggish 21-13 victory over Central Florida.

Dantzler, who nearly became the first quarterback in NCAA history with 1,000 yards rushing and 2,000 yards passing in the same season last year, completed 15-of-25 passes for 154 yards and a touchdown while rushing for 46 yards on 18 carries. His teammates accounted for just 92 yards as Clemson’s offense sputtered.

“I’m frustrated because there are plenty of times I could have made a play and broke this thing open and didn’t do it,” Dantzler said.

If history is any indication, the Tigers shouldn’t have much trouble beginning 2-0 for the second straight season and fourth time in six years. They have won 45 games in a row over teams currently in the Southern Conference, including 12 of the last 14 by shutout.

Running back Travis Zachery scored his Clemson-record 40th career touchdown last Saturday on a five-yard pass from Dantzler. Zachery has 35 TDs in his last 25 games.

Wofford was 7-4 last season under Mike Ayers, who earned Southern Conference coach of the year honors. Clemson is the only Division-I opponent the Terriers will face this season.

Dantzler will not be the only versatile quarterback on the field Saturday. Wofford senior Travis Wilson rushed for 779 yards and passed for 1,202 last season. For his career, he has 2,069 yards on the ground and 3,039 through the air.

Wofford will be playing in front of the largest crowd in school history Saturday with more than 70,000 fans expected at Clemson Memorial Stadium. The previous high was 60,000 set the last time the teams met at Clemson in 1981.

Clemson has won nine of 12 meetings against Wofford, with the Terriers’ last victory coming in 1933.