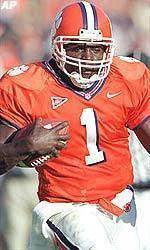 Clemson, SC — Woody Dantzler put on one more show in Clemson Memorial Stadium on Saturday morning, leading his White team to a 36-30 victory over the Orange Team in the Second annual Clemson Sons Bowl. The flag football game that is played between former Clemson players was the appetizer for Clemson fans prior to the Clemson Spring Football game on Saturday.

Dantzler was known for his all-around athletic talents as a Clemson quarterback between 1998 and 2001. As a senior he became the first Division I player in history to threw for at least 2000 yards and rush for 1000 in the same season.

Saturday, Dantzler completed 11-18 passes for 186 yards and three scores and caught three passes for 135 yards and a touchdown. His receiving numbers were benefited by a 90-yard touchdown reception from Tribble Reese, a senior on the 2007 Clemson team. Dantzler took a shot pass from Reese in the right flat and turned it into a 90-yard score. Reese completed 9-12 passes for 153 yard and also had a game high five receptions for 66 yards.

Dantzler’s White team trailed 30-22, but scored the last 18 points of the game. First he threw a five-yard scoring pass to Reese, then completed the two-point conversion pass to former Clemson punter Kevin Laird to tie the game. Then he threw what proved to be the game winning touchdown pass to Stephon Wynn from 10 yards out to put his team up 36-30.

The Orange team had a chance to win the game with a final drive. But, Patrick Sapp’s pass over the middle was intercepted by Reese to end the game. Sapp finished the game with 361 yards passing and four touchdown passes while hitting 14-25 passes.

The Orange team, coached by current Philadelphia Eagles All-Pro safety Brian Dawkins, executed the top trick play of the day. Sapp completed a pass down field to Donnie Jewell, who then flipped the ball to Altroy Bodrick who sped down the sidelines to complete the 80-yard scoring pass.

The game was dominated by passing. There were 70 plays in the game and just three of them resulted in running plays.