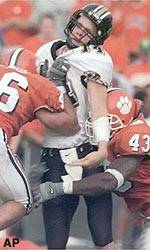 CLEMSON, S.C. – Clemson coach Tommy Bowden praised both his offense and defense Saturday after his team’s most prolific performance in almost 19 years – a 62-9 rout of Missouri.

Woodrow Dantzler threw two touchdown passes and ran for a third score and No. 17 Clemson’s defense forced Missouri into three fumbles and three interceptions that led to 27 points.

“Any time you get six turnovers, the score has the opportunity to get out of hand,” Bowden said.

Dantzler put Clemson up 21-9 with a 38-yard touchdown pass to Rod Gardner with 2:27 left in the half. With just a five-point lead, Clemson elected to go for it on fourth-and-5, and Gardner broke two tackles on the way to the end zone.

“He just wants the ball,” Dantzler said of Gardner, saying the receiver had been unfairly criticized for being unable to produce after the catch.

“I guess he showed today he can break the tackle, get free and run away from a couple of people, and then he can go and make the big play.”

Gardner finished with four catches for 98 yards and two touchdowns.

“He’s our best guy,” Bowden said of Gardner. “When it’s fourth and five to win the game, to continue the drive, you throw it to Rod Gardner.”

Two plays later, Clemson’s Freddie James forced Zain Gilmore to fumble, with Clemson’s Brian Mance recovering. Dantzler guided Clemson on a five-play, 27-yard drive, ending with a 14-yard quarterback draw to the end zone with 39 seconds left in the half. Clemson went into halftime up 28-9.

Missouri’s Kirk Farmer threw his second interception just 47 seconds into the second half. Clemson’s Charles Hafley caught the pass in stride at the Missouri 28 and returned it for a touchdown. Aaron Hunt missed the extra point, giving Clemson a 34-9 lead.

Farmer’s third interception was caught by Mance – his second – setting up Travis Zachary’s third touchdown, a 2-yard run that put Clemson up 48-9.

“The second half was a matter of turnovers. It was atrocious,” Missouri coach Larry Smith said. “I think we lost it because we played sloppily in the second quarter and in the third quarter.”

Clemson didn’t score again until the fourth quarter, when Keith Kelly capped a 16-play, drive with a 1-yard run.

Kelly finished the scoring with a 13-yard run.

The loss Missouri’s fifth straight on the road.

Clemson looked sloppy on its first possession, but Dantzler returned to form on Clemson’s second possession as his Tigers went 81 yards on 13 plays. Zachary punched it in from the 1-yard line.

After a fumble by Joe Don Reames on the kickoff, Hammerich kicked a 35-yard field goal to make it 14-9 with 5:06 in the half.

Mance, a backup cornerback who had just 17 career tackles before Saturday, tied a Clemson record with three turnover recoveries – two interceptions and a fumble recovery.

“I was just lucky, being in the right place at the right time. Everything worked out,” Mance said.

Farmer finished 12-of-25 for 131 yards with three interceptions. Gilmore led Missouri in rushing with 37 yards and one touchdown on 11 carries.