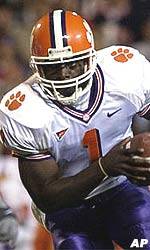 Dantzler And Carson To Play In East-West Game

Clemson, S.C. — Clemson quarterback Woodrow Dantzler and linebacker Chad Carson will play on the East team in the East-West Shrine Game on Saturday. The contest will begin at 1:30 PM eastern time in Palo Alto, CA and it will be televised on ESPN-2.

Carson led the Tigers in tackles with year with 137 and he finished his career with 449, fifth best in school history. He was a first-team Academic All-American for the second straight year. He was also the only Division I college football player to reach the finals of the Rhodes Scholarship competition.