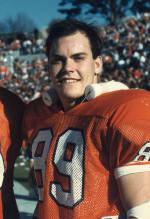 Pearman comes to Clemson from the University of Maryland where he served as tight ends and special teams coach this past season, helping the Terps to bowl bid. Pearman has been an assistant coach for a school now in the ACC for the last 11 years. He served on Duke’s staff in 2007 and at North Carolina in 2006. He also had an extended career at Alabama (1990-97) and Virginia Tech (1998-2005). He was on the same staff with Swinney at Alabama during the 1993-97 seasons.

When Pearman coaches for the Tigers in the Konica Minolta Gator Bowl on January 1 against Nebraska it will be his 17th bowl game as an assistant coach.

“Danny Pearman was on the National Championship coaching staff at Alabama in 1992 when I was a player,” said Swinney. “He brings a tough, hard-nosed approach and is a great fit for this staff. He is a Clemson graduate who has a keen appreciation of this school’s tradition. He has a great pedigree, as he has worked under Gene Stallings, Frank Beamer and many other top coaches. He is also an outstanding recruiter and is very familiar with the ACC. “

Pearman helped the Maryland offense to a number-two ranking in the ACC in passing, and a number-three ranking in total offense during the 2008 season. Starting tight end Dan Gronkowski was named honorable mention All-ACC and had 29 receptions for 287 yards. He ranked third among all ACC tight ends in receptions.

He also had a strong impact on the Maryland special teams. He coached sophomore punter Travis Baltz to first-team All-ACC status with a 41.4 average. Maryland was also eighth in the nation in fewest yards allowed per punt return. The Terps were first in the ACC and 16th in the nation in net punting.

He began his coaching career as a graduate assistant coach at Clemson under Danny Ford in 1988 and 1989. Clemson won the ACC championship in 1988 and posted 10-2 records in each of those seasons.

Pearman moved on to Virginia Tech as a member of Frank Beamer’s staff in 1998. He served an eight-year tenure as tight ends, tackles and a special teams assistant.

Pearman helped Virginia Tech to eight consecutive bowl appearances, including the national championship game against Florida State in the Sugar Bowl at the end of the 1999 season. During his time at Virginia Tech he coached Jeff King, an All-ACC tight end and a fifth-round draft choice of the Carolina Panthers, and Bob Slowikowski a sixth-round draft choice of the Dallas Cowboys in 2002.

Pearman and his wife Kristy have three children, a daughter, Taylor, and two sons, Tanner and Trent.