Editor’s Note – This is the 40th anniversary of Clemson’s first national championship season in 1981. For each program in 2021, Tim Bourret takes us back to that season with features on players or games from the landmark year.

As the years go on, his record gets more and more impressive. And when you look at the coaching structure of college football today, it might last forever.

Over the last 35 years, no coach younger than 40 has won the national title. Bob Stoops was 39 when he and the Oklahoma Sooners started the 2000 season, but he had turned 40 when he hoisted the trophy after beating Florida State for the title.

The coach with the best chance to beat Ford’s record in the last 40 years has been Lincoln Riley, who took Oklahoma to the 2018 College Football Playoff when he was 33. With a September birthday, he would have broken Ford’s record by a few months. But he lost in overtime to Georgia in the Rose Bowl.

A look to the Tigers’ current staff tells us that only four of the 11 full-time coaches were coaching at a Power Five Conference school when they were 33 years of age. Dabo Swinney was selling real estate when he celebrated his 33rd birthday.

Born April 2, 1948, Ford was already in his third full campaign leading the Clemson program when the 1981 season commenced. Ford took over when Charley Pell left for a 100-percent increase in pay at Florida after the 1978 regular season.

After Pell resigned, Ford had a strong backing from the players. Joe Bostic was among 20 players on the 1978 team who went to a Board of Trustees meeting at Sikes Hall the weekend after Pell resigned.

“Colonel (Rick) Robbins (assistant athletic director who supervised the academics of the football team) told us about a Board of Trustees meeting, and if we wanted to have our voices heard, we needed to go over to Sikes Hall,” recalled Bostic, a senior leader and All-American on the 1978 team.

“We found the meeting room and met a guard outside. He told us we couldn’t go in. We told him if we didn’t get in, there wouldn’t be a Gator Bowl that season.”

That threat apparently made a difference with the guard and the players walked into the meeting of 15 members of the Board of Trustees and other university officials.

“We had a letter that was signed by most of the players giving support to Coach Ford.

The hiring of Ford was a little controversial in that he had not even been the offensive coordinator on Pell’s staff. He was the offensive line coach, but he also had the title of assistant head coach.

“Coach Pell was ‘Coach A’ and Coach Ford was ‘Coach B’ in our minds,” added Bostic.

So on Monday, Dec. 5, an Alabama graduate was promoted from an offensive position coach to become Clemson’s head coach even though he had never been a coordinator. Where have we heard that before? Forty years later, the only coaches who have won the national title at Clemson have fit that description.

Ford hit the ground running, beating Woody Hayes and Ohio State in the 1978 Gator Bowl. Then in 1979, his first full season at age 31, he led the Tigers to a 16-10 win at Notre Dame, still the second-youngest coach to beat the Fighting Irish at Notre Dame Stadium.

The 1980 season had ups and downs with some heartbreaking losses, but it ended with an upset win over No. 14 South Carolina and Heisman Trophy winner George Rogers.

That victory, highlighted by the appearance of orange pants for the first time, gave Clemson great momentum for the 1981 season.

The preseason unranked Tigers gained top-10 wins over Georgia (Herschel Walker’s only regular-season loss as a Bulldog), North Carolina, which featured the first matchup of top-10 teams in ACC history, and Nebraska in the Orange Bowl. Clemson was the only perfect team (12-0) that year and the only team to finish with three wins over teams in the final top 10.

Ford had gone from offensive line coach to national championship coach in just three years, and at the age of 33 years, three month and two days, he had broken Bud Wilkinson’s record as the youngest coach to win the title. Wilkinson was 34 when he led Oklahoma to his first title in 1950. 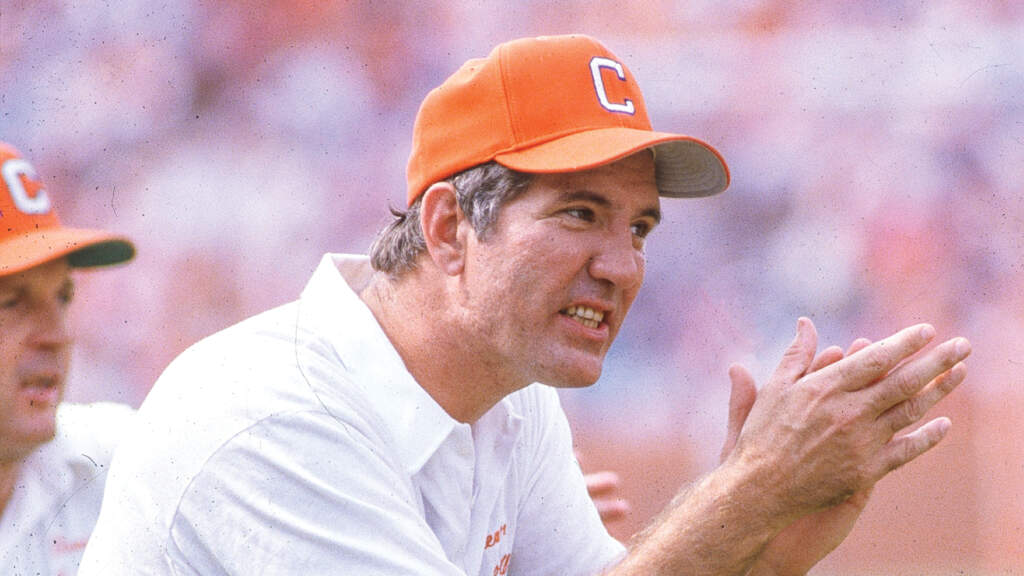