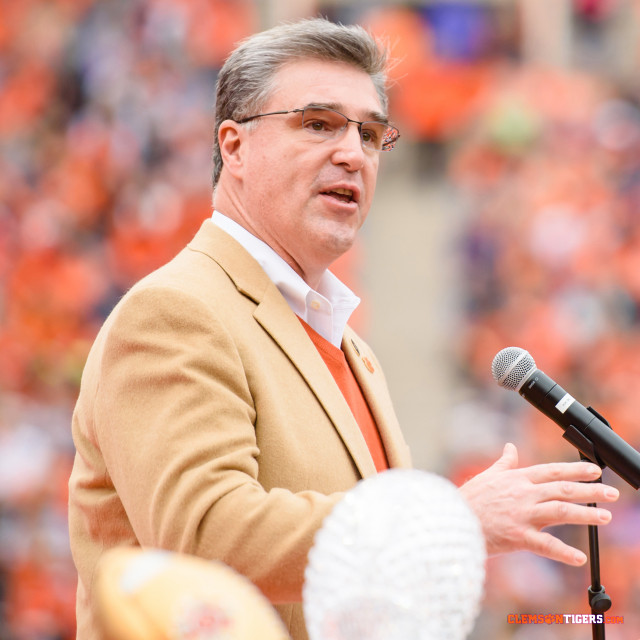 It was Tuesday night, Nov. 3, 2015. Dan Radakovich had just landed in Clemson after the first round of meetings for the College Football Playoff committee. It was Radakovich’s second year on the committee, but his first in which his current employer was in the mix for the College Football Playoff. The Tigers were undefeated and not only in the hunt for the playoff, but were the odds-on favorite to be the No. 1 team in the first ranking.

“I had just gotten into my car at the Clemson airport and my cell phone rang,” recalled Radakovich with a smile. “It was president (Jim) Clements and he was interested to see if we were No. 1.”

It was 6:50 p.m., just 10 minutes away from the ESPN program that would announce the rankings.

“Jim was as anxious as anyone to find out if we were No. 1, so he called. But I had to tell him, even though you are our president, I have to abide by the rules of the committee and I did not tell him we were in fact No. 1. He understood and waited to see the ESPN broadcast with everyone else in the nation.”

A similar situation happened this year for the poll the week after Auburn defeated Alabama, moving the Crimson Tide out of the top spot for the first time in 2017.

“I had an early flight out of Dallas and made it back to the Reeves building in time to see Dabo (Swinney). He came over to me and asked with a smile, ‘Well, are we No. 1?’ I had a big smile, too, but I could not tell him.

“But he should have figured if I came over to the building just before the show, we were in good shape.”

That is one of the clear rules of being on the College Football Playoff committee…you can’t divulge the rankings before they are released through the proper channels, not even to your university president or head coach.

“One of the points of pride with the committee was confidentiality. That was something that was stressed by Ari Fleischer, who was our advisor from a public relations standpoint. It was very important that the results of the poll were not made public prior to the release on ESPN. In my four years on the committee, nothing ever leaked.”

Radakovich just completed four years on the College Football Playoff committee, one of five members to serve each of the first four years of the CFP format. The others were Jeff Long, former athletic director at Arkansas, Tom Jernstedt, a retired NCAA executive director, Steve Wieberg of USA Today and former Stanford, Washington and Notre Dame head coach Tyrone Willingham.

There will be six new members on the committee in 2018, almost half of the group. The 2018 committee will have a representative with ties to Clemson, as former Tiger of the early 1970s, Bobby Johnson, a respected coach at Vanderbilt and Furman, is a returning lettermen.

It was a rewarding four years for Radakovich, who was named the top director of athletics in the nation by SportsBusiness Journal last year.

“This was the best committee I have been on because Bill Hancock, Michael Kelly and their staff made sure we had everything we needed to do our job. That included data, video, travel…all the logistics were taken care of efficiently.”

The committee varied in size over the first four years due to illness or personal reasons of some committee members just before or during the season. The weekly meetings in Dallas began in late October or early November. The group gathered at a hotel with meetings that began each Monday at 1 p.m., and continued until Tuesday at noon.

The voting for the top-25 teams, an intricate process, concluded on Tuesday, and the committee left for their respective homes across the nation sworn to secrecy for the next seven hours until the top 25 was released.

While the committee is in its infancy compared to the NCAA basketball committee, it did benefit from the format that had been established many years ago by the group that picks the basketball fields in men’s and women’s competition.

“The CFP was set up like the NCAA basketball committee,” said Radakovich. “Instead of picking 68 teams, we were picking four, but the basic methods were taken from that committee.

“Every detail was covered. We were supplied with information provided by Sports Systems Analytics out of Atlanta. I was able to work with them to come up with my own formula for evaluation of teams. We all had that option. The metrics at our disposal were in the 100s.

“For instance, we could take a look at past champions and compute analytics for them to see what were some of the strong common characteristics of past champions, then make those computations for the current teams.

“As far as the video, we had access to the coaches film version or the TV broadcast with the commercials removed. I could review a complete game in about 40 minutes. I looked at games on Sunday afternoon and night, and on the plane flights to Dallas.”

While it was a lot of work, Radakovich said it was one of the most rewarding experiences he has had in 35 years in college athletics.

“This was also a special experience for me, because Clemson was in the mix for the playoff the last three years. Now, I had to leave the room when Clemson was discussed, but it gave me pride knowing our program was in high regard by everyone on that committee.”

Committee members had to leave the room when teams they worked for were discussed. That meant Radakovich was outside the room when Clemson was discussed, and Gene Smith, the athletic director at Ohio State, left the room when the Buckeyes were on the table.

Clemson finished Radakovich’s four years on the committee ranked in the top 25 of every poll, something only Alabama and Ohio State can also claim. The Tigers were in the top four in each of the last 18 polls, including No. 1 in all six rankings in 2015. Clemson holds the distinction of being the first school to rank No. 1 in every poll during a season (Alabama did it in 2016), and had eight No. 1 rankings over the last three years.

With a committee from a wide spread geographically, it was intriguing to think about the discussions that went on in that room. Radakovich has seen every one the last four years.

“We were a committee that would have disagreements, but we weren’t disagreeable when it came to the discussions. It said a lot about the character of the people on the committee. They listened to each other. Everyone was professional.”

One of the perks for Radakovich in the coming years will be an invitation to the national championship game. The night before the game, there is a dinner for all the committee members, past and present. It reminds some of the Masters champions dinner.

“It has been a lot of work, a lot of travel, but very rewarding,” added Radakovich. “I am looking forward to going to those future championship games and spending time with those committee members.

“And hopefully, we will be watching the Tigers play the next night.”

A. Any “recused” member can participate in step 1 but cannot list the team for which he or she is recused. “Recused” teams (i.e., teams for whom a member has been recused) receiving at least two votes in step 1 remain under consideration.

B. A recused member can participate in step 2 but cannot list the recused team. If a recused team is within one vote of advancing to the pool for the next ranking step, that team is pooled with the team (or teams) receiving the fewest votes. If necessary, a “tiebreaker” ranking vote is conducted among those teams to identify the team or teams that would be added to the pool.

C. A recused member cannot participate in step 3 if the recused team is in the pool.

D. Between each step, the committee members conduct a thorough evaluation of the teams before conducting the vote.

E. After each round is completed, any group of three or more teams can be reconsidered if more than three members vote to do so. Step 3 is repeated to determine if adjustments should be made.

G. At any time in the process, the number of teams to be included in a pool may be increased or decreased with approval of more than eight members of the committee.

H. After any round of voting, a team or teams may be added to the initial pool by an affirmative vote of three or more committee members.

I. All votes are by secret ballot.