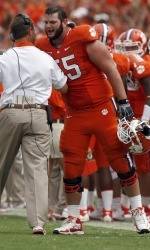 GREENSBORO, NC – Clemson center Dalton Freeman and Virginia Tech quarterback Logan Thomas headline a list of eight players named as the ACC Football Players of the Week, announced by the conference on Monday. Freeman, the Offensive Lineman of the Week, helped the Tiger offense accumulate 522 yards of offense in a 31-28 win over Wake Forest to clinch a spot in the ACC Championship. Thomas, the Offensive Back of the Week, accounted for five touchdowns as Virginia Tech defeated Georgia Tech 37-26.

Thomas is joined by teammate Danny Coale, the Receiver of the Week, who had 97 receiving yards in the win over the Jackets. The Virginia Cavaliers also had two players honored for their 31-21 win over Duke, with Matt Conrath being named the Defensive Lineman of the Week and Chase Minnifield receiving the Defensive Back of the Week award.

Florida State’s Shawn Powell was named the Specialist of the Week for averaging 54.8 yards per punt in the Seminoles’ 23-19 win over Miami. Maryland linebacker Alex Twine rounds out the list with his first Rookie of the Week award.

OFFENSIVE LINEMAN – Dalton Freeman, Clemson, r-Jr., C, 6-5, 285, Pelion, S.C. Freeman led Clemson’s offensive line effort to 522 yards of total offense in the 31-28 win over Wake Forest. Freeman was playing with a heavy heart as his grandfather had passed away earlier in the week. Freeman graded 93 percent with 5 knockdowns for his 86 plays and provided a key block on both of Andre Ellington’s touchdown runs. He did not allow a sack.

OFFENSIVE BACK – Logan Thomas, Virginia Tech, r-So., QB, 6-6, 254, Lynchburg, Va. For the second time this year, Thomas accounted for five touchdowns as the Hokies went to Georgia Tech and came away with a win. The sophomore completed seven passes for 209 yards and three touchdowns and picked up two rushing touchdowns and 70 yards on the ground.

RECEIVER – Danny Coale, Virginia Tech, r-Sr., WR, 6-0, 200, Lexington, Va. Coale only had two catches, but both of them were big as the Hokies went to Georgia Tech and came away with a 37-26 win. His first catch was a 63-yard touchdown catch late in the first half to give Virginia Tech a 21-10 lead and then his second was a leaping catch down the sideline on a key third down. Coale finished with two catches for 97 yards and a score in the win.

DEFENSIVE LINEMAN – Matt Conrath, Virginia, Sr., DT, 6-7, 280, Oak Lawn, Ill. Conrath led the UVa defense with nine tackles in Virginia’s 31-21 victory against Duke to improve the Cavaliers’ record to 7-3 and 4-2 in conference play. Conrath had two tackles for loss, forced a fumble and blocked a Duke field-goal attempt in the first quarter after the Blue Devils had driven to the Virginia 7-yard line with no score in the game. It was the fifth blocked kick during his career and his third this year. The Cavaliers held Duke’s running game to just 34 yards on 29 carries, 70 yards below their season average. Duke scored just seven points in the second half as UVa pulled away after the game was knotted 14-14 at the half.

LINEBACKER – Luke Kuechly, Boston College, Jr., LB, 6-3, 237, Cincinnati, Ohio Kuechly recorded a game-high 18 tackles, including nine during a 13-minute stretch of the fourth quarter as Boston College held for a 14-10 win over NC State. He missed a few plays after suffering a bruised right elbow early in the third quarter. Kuechly extended his nation-best streak to 32 games with double-digit tackles, and in the third quarter became the fifth player in ACC history to reach 500 tackles in his career.

DEFENSIVE BACK – Chase Minnifield, Virginia, Sr., CB, 6-0, 185, Lexington, Ky. Minnifield had five tackles and broke up two passes in Virginia’s 31-21 victory against Duke. He came up with the big play on defense, intercepting a pass and returning it 54 yards for a score to put UVa up 21-14 early in the third quarter. Minnifield’s interception was his third of the 2011 season and the 13th of his career. It was his first pick-six.

SPECIALIST – Shawn Powell, Florida State, Sr., P, 6-4, 235, Rome, Ga. Powell was nothing short of brilliant in helping the Seminoles win the field position game against the rival Hurricanes. He punted five times for 274 yards – a 54.8-yard average – and with the help of his coverage units finished with a net average of 47.4 yards. Powell’s opening punt of the game sailed 51 yards and was angled out of bounds at the Miami 1-yard line. He also pinned the `Canes back at their own 6-yard line with a 39-yard punt – his shortest of the game. In all he had four punts over 50 yards, including two over 60 (66, 63). The ACC leader in punting (47.1), Powell would lead the nation if he had two more punt attempts to meet the minimum standard of 3.6 per game. The Seminoles are ranked second nationally in net punting average. For his performance against Miami, Powell was selected National Punter of the Week by the College Football Performance Awards.

ROOKIE – Alex Twine, Maryland, Fr., LB, 6-0, 220, Gaithersburg, Md. Twine posted a career-best 12 tackles in Maryland’s 45-21 loss to Notre Dame. In just his third career start, the sure-tackling outside linebacker posted 3.0 tackles for loss, the most by any Terrapin defender this season, and one sack. Twine has played in all 10 games, but has averaged 10.0 tackles in his three starts.