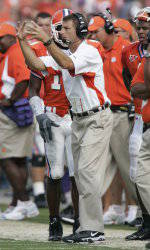 Clemson, SC – Clemson Assistant Head Coach Dabo Swinney was ranked among the top-25 college football recruiters in the nation according to Rivals.com on Thursday. Swinney was one of six ACC coaches on the list.

Clemson’s 2008 recruiting class was ranked #2 in the nation by ESPN.com, #10 by CSTV.com, #11 by Scout.com, and #12 by Rivals.com. It marks the fourth year in a row that the Tigers were ranked in the top 21 by Rivals.com. Clemson is one of three ACC schools to be in the top 21 four years in a row by Rivals.com, joining Florida State and Miami (FL).

Swinney, who completed his fifth season at Clemson in 2007, coaches the Tiger wide receivers. The Alabama graduate coached Aaron Kelly to a school-record 88 catches for 1,081 yards during the 2007 season. Tyler Grisham added 60 catches in 2007 as well.