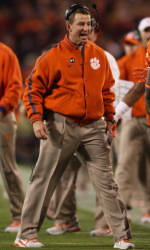 Dabo Swinney One of Five Finalists for Eddie Robinson Award

CLEMSON, SC – Clemson Head Coach Dabo Swinney has been named a finalist for the Eddie Robinson National Coach of the Year Award. The honor is presented each year by the Football Writers Association of American. The other finalists are Les Miles of LSU, Mike Gundy of Oklahoma State, Brady Hoke of Michigan and Bill Snyder of Kansas State.

Clemson, who was unranked in the preseason, ranks 14th in the AP and USA Today polls entering the bowl season and was 15th in the final BCS poll, tied for Clemson’s highest finish in the BCS.

The third-year Clemson coach has taken the Tigers to a 10-3 record overall, including four wins over top 25 teams, tied for the second most in the nation and the most in one season in school history. The Tigers own two wins over a Virginia Tech team that was ranked in the top 10 in the nation, including third ranked prior to the ACC Championship game. That tied for the highest ranked team Clemson has defeated in its history.

Earlier in the year Clemson defeated top 25 teams from Auburn, Florida State and Virginia Tech on consecutive weeks, the first ACC team to defeated teams ranked in both polls in three straight games. The 10 wins are the most for the Clemson program since the 1990 season.

Swinney’s Tigers will play in the Discover Orange Bowl against West Virginia on January 4. It will be Clemson’s first appearance in the Orange Bowl in 30 years.