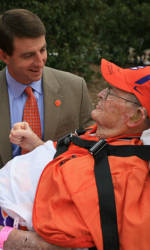 “Jeff Davis and I went to see Dr. Edwards shortly after I was named interim head coach. He was in poor health, but he still was a joy to listen to and you could still see that Clemson spirit. During that conversation, he talked about all the times he had wished Clemson athletic teams well as they began a road trip. We aren’t just talking about the football team, all sports. He told me it was his way of thanking those student-athletes for representing Clemson and for all the hard work they put in as student-athletes on and off the field.

“During that visit he mentioned to me that he hoped to see the Clemson football team one last time before he died. Thankfully with the help of Fred Hoover and Dr. Edward’s daughter and the EMS, we were able to see Dr. Edwards at the Jervey Athletic Center parking lot just before we boarded the busses to go to the hotel the Friday before the South Carolina game.

“I will always remember how firm he held he shook my hand and his strong fist as he showed when he met with our players one-by-one as they boarded the bus. He was alert and was an inspiration to all of us. I am most thankful that he got to see us win that South Carolina game.

“Dr. Edwards did so much for Clemson athletics and this university. The thing I will always remember about him the most was how much he cared about the Clemson students. “