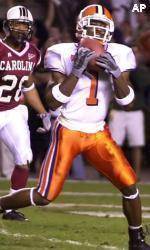 Clemson football players Airese Currie and LeRoy Hill have both been named Strength All-Americans by the National Strength and Conditioning Association (NSCA). It marks the second consecutive year Clemson has had two selections to this team, as John Leake and Gregory Walker were chosen after the 2003 season.

The 2004 selections give Clemson 12 strength and conditioning All-Americans under Joey Batson, who has led the program since 1997.

Currie led the ACC in receptions (61) and reception yards (868), the first Tiger receiver to lead the league in both categories since Perry Tuttle did it in 1980. He finished his Clemson career ranked in the top 10 in receptions and reception yards. He was a first-team All-ACC selection in 2004 and was a fifth round draft choice of the Chicago Bears last Sunday.

Hill was named the defensive player of the year in ACC, as he led Clemson in tackles (106), tackles for loss (19) and sacks (8). He ranked in the top 15 in the nation in both tackles for loss and sacks in 2004 when he was named first-team All-ACC for the second straight year. Last Saturday the third-team Associated Press All-American was drafted in the third round by the Seattle Seahawks.