Defensive tackle Jordan Williams had the distinct privilege of playing in the same position group as Clelin Ferrell, Dexter Lawrence and Christian Wilkins during the prime of their Clemson careers. Williams did not take the opportunity for granted and did what he could to learn from them as a player and as a person.

“It’s not very often you get to watch three first-round draft picks work every day and show you the way. Seeing how those guys show up, the attitude they had and the work they put in, it was so special to watch, and I tried to sit back and soak it in.”

Despite being two years removed from the program, those now NFL players still keep in touch with Williams and other members of the 2020 team, and that continued camaraderie is something he plans to continue when his days at Clemson come to an end.

With those legends of the past now out of the picture in Tigertown, Williams has taken over the role of mentor and leader to the younger players on Clemson’s youthful defensive line.

As a redshirt junior and one of the oldest guys in the defensive line room, he has taken lessons from his mentors and is handing them down to another generation. Despite the line’s youth, Williams speaks very highly of the group’s work ethic and willingness to learn.

“All of the young guys love to work. They take coaching, they want to improve and they are easy to work with. It’s something special that is going to continue to grow and get better for years to come.”

As one of the eldest statesmen on the Clemson defensive front, Williams made his first career start in the 2020 season opener at Wake Forest. After getting limited snaps in his first two seasons, this came as a well-earned achievement for #59.

“There’s been a lot of competition in the defensive line room. Earning that spot was so exciting for me. It’s a different role that I’m ready to take on and fully embrace.”

Williams is another in a long line of highly touted Virginia natives to choose Clemson as the place to continue their football and academic careers. With the likes of Ferrell, K’Von Wallace, Sheridan Jones and Malcolm Greene hailing from the Old Dominion State, the Tigers have found a lot of success in that part of the country.

For Williams, that is not a mere coincidence. The message Clemson and its recruiting staff sends appeals to people from a great state for high school football like Virginia, and it allows the Tigers to show recruits that Clemson is where they need to take their game to the next level.

“Clemson is not a program that offers a bunch of guys, so to get an offer from Clemson was special. With everything we have going on and the culture we’ve built between the winning and the great relationships with the coaching staff, that’s what gets a lot of guys from Virginia.” 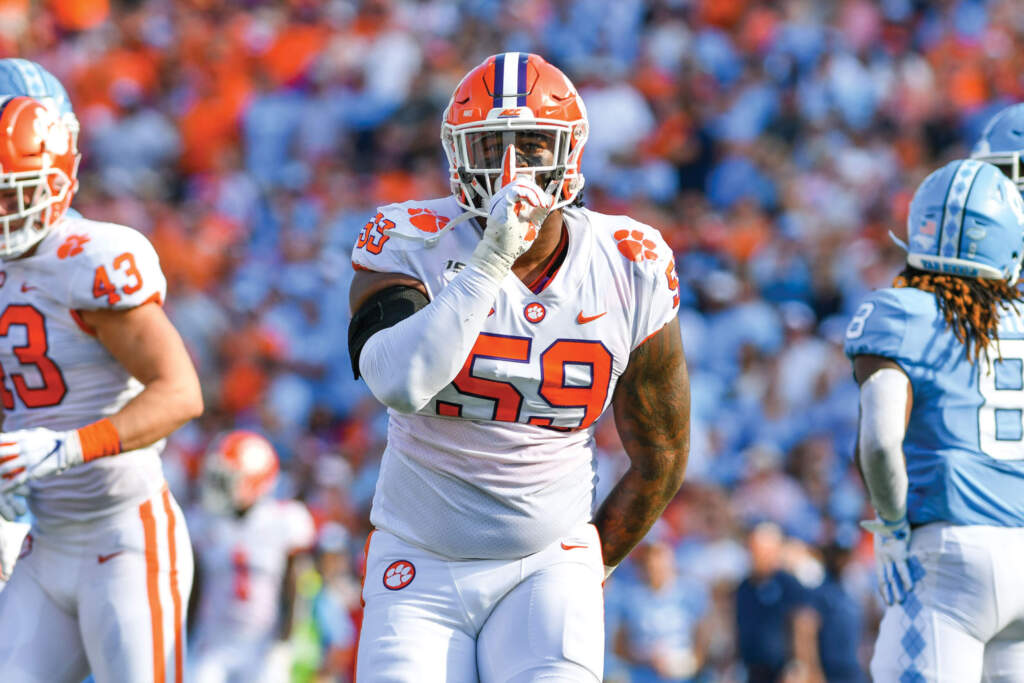 All of these characteristics of the Clemson football program were a positive factor in his decision, but his parents made it clear that he needed to prioritize academics when choosing where he would play football next.

A communication major, Williams is on track to graduate in December and plans to use his education to impact as many lives as he can. He sees his next move as a choice between coaching or moving into the studio and performing broadcast analysis.

Off the field, Williams prioritizes his family and acts in a way that makes them proud. He lost his grandmother entering his freshman year of high school, and he uses her memory as fuel to keep working as hard as he can.

“We had a very different relationship. She was very hard on me and she pushed me, because she knew since day one that I could make it and she always believed in me. Losing her was something that was very tough for me, but it’s my reason to keep going because she always kept faith in me, and I would hate to let her down.”

Williams is the only football player in his immediate family, in which he is the youngest of four brothers. Despite being the youngest of the group, the 6’4”, 310-pound interior lineman quickly became the largest member of the family in size, earning him the nickname, “Little Big Brother.”

Despite his massive stature, Williams sees himself as a “goofy, caring guy.” He loves to laugh and have as much fun as he can with the opportunities he has been presented, while also taking them seriously and being sure to make the most of them.

“I love to enjoy being in the moment. There’s so much bad going on in the world and you don’t want to fall into that. You need to keep your spirits up and have a good time. But I also love to win, I hate to lose and I do everything I can for my team, my fans, my family and myself to win.”

After every game, he looks forward to joining his teammates in the locker room for their traditional post-victory dance and thinks it will be one of the things he remembers most about his time as a Tiger. That desire to have fun and live in the present is encouraged with Clemson’s culture, which was also a big part of his decision to enroll at Clemson.

“You see it in recruiting, and you wonder if it’s just for that, but then you get here and you’re a part of it and you see this is who we are. This is the DNA here, and I love it.”

Williams and the rest of his fellow Virginians on the roster are doing everything in their power to continue the culture, not just in their time here, but for future seasons as well.