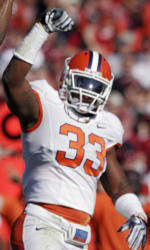 CLEMSON, SC – Two seniors on Clemson’s 2009 football team that helped the Tigers to the Atlantic Division ACC Championship and a final top 25 ranking have both been named to an NFL All-Rookie Team for the 2010 season.

Ford established an Oakland Raiders team record for kickoff returns for touchdown this past season when he had three. For the year he had 53 returns for 1280 yards, a 24.2 average. He also had 25 receptions for 470 yards and two scores, and gained 155 yards rushing in 10 attempts and scored twice. He scored seven touchdowns overall and had 1905 all-purpose yards in 88 touches, an average of 21.65 yards per touch.

In week nine of the regular season, Ford helped the Raiders to an overtime victory against Kansas City with six receptions for 148 yards and a score on offense, and he had a 94-yard kickoff return for a score to open the second half to give the Raiders momentum. For his efforts, Ford was named the NFL Rookie of the Week.

Conner became a starter for the Indianapolis Colts by the middle of the season. He finished the year with 57 tackles, 52 of which came over the last 10 games of the year. He had 15 more tackles than any other rookie outside linebacker in the NFL.