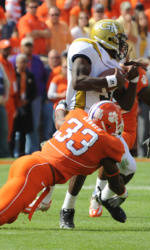 Clemson, SC – Clemson senior linebacker Kavell Conner is one of 35 players on the 2009 Butkus Award Watch list. He is the third Clemson defensive player on an award watch list on the Clemson defense this year. Crezdon Butler and Chris Chancellor are both on the preseason Watch List for the Jim Thorpe Award, which is given to the top defensive back in college football.

Conner, a native of Richmond, VA, had 125 tackles last season to lead the Clemson team. He tied for 10th in the ACC in tackles and now has 202 for his career, third among active league players. Conner began the year with an 18-tackle performance against Alabama in the Georgia Dome, tying a Clemson record for tackles in a season opener. That is his career high for a single game. He added 11 tackles in the Konica Minolta Gator Bowl against Nebraska.