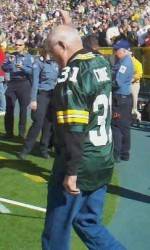 Each home game the Packers honor a former great. Cone was honored along with Robert Brown.

Cone was a multi-talented kicker and fullback for the Packers from 1951-57. He led the NFL in field goals in 1955 with 16. He still ranks third in Packers history in extra points with an even 200. For his Packers career he scored 455 points, had 53 field goals, rushed for 1156 yards and 12 touchdowns and caught 75 passes for 852 yards and four scores.