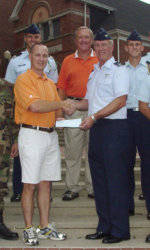 John Earle, co-owner of Tiger Town Graphics represented local Clemson merchants on Friday as he presented a check in the amount of $5,000 to members of the Clemson University Air Force and Army ROTC Departments. The money was raised through the sale of special Military Appreciation T-shirts sold for the Clemson-Texas A&M football game earlier this month.

According to Col. Lance Young, Air Force Professor of Aerospace Studies, the money will be divided amongst the departments to help meet the needs of all the student groups in the ROTC Departments (Pershing Rifles, Tiger Platoon, Arnold Air Society, Silver Wings, Scabbard & Blare, Rangers and Clemson ROTC Running Club).

“On behalf of the ROTC Departments we would like to thank all the Aggie and Tiger fans who purchased the shirt and especially to the local merchants for joining together to make the shirts available,” said Lt. Col Phil Kaiser, Professor of Military Science, who also helped coordinate the project. Participating merchants included Tri-County Ace Hardware, Judge Keller’s, Mr. Knickerbocker, Student Book Store and Supply, The Athletic Department, The Tiger Sports Shop, Tiger Town Graphics and ClemonTigers.com.

Description of the t-shirt design * Tillman Hall is the first academic building on the Clemson University campus. * The clock is set for 8:00 o’clock which is the unofficial kickoff time for the game. * The 8 stars across the top represent those soldiers who attended Clemson University (3) and Texas A&M University (5) who have made the ultimate sacrifice in Afghanistan or Iraq.