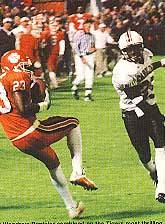 Clemson, SC – COLLEGE SPORTS SOUTHEAST concludes the replay of the Clemson Football season this Sunday as SCETV airs the 2000 Clemson vs. South Carolina football game. The game will be broadcast between 5:00 and 8:00 PM on SCETV.