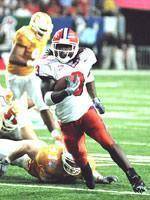 Clemson, SC – Starting running back and 2003 rushing leader Duane Coleman (Junior, Naples, FL) suffered a broken foot during practice Tuesday and will miss six to eight weeks. It was the first day of full pads and full contact for the Clemson football team. Receiver Michael Collins also could miss the opening game against Wake Forest with a leg injury.

Coleman’s injury occurred in the middle of practice and x-rays revealed the break. It is not known at this time if he will require surgery. “The injury took place in a low risk one on one drill,” said head Coach Tommy Bowden. “He was tackled and landed wrong, bending the foot. This is a big loss because he was our leading returning rusher from last year and he is a valuable receiver out of the backfield. He can do things that our other backs can’t.”

Coleman had 615 yards rushing to lead the team and had 34 catches for 309 yards receiving in 2003. He joined Travis Zachery as the only player in Clemson history to have at least 600 yards rushing and 300 receiving in the same season, documentation of his versatility. “Duane was starting to make some separation from our other backs. He was so critical to our offense on third down last year as a runner and as a receiver. With his loss we will have to evaluate what we are going to do offensively, especially on third down.”

Bowden does have some experienced players behind Coleman and they will have to step up their play in the preseason. “Yusef Kelly, Reggie Merriweather and Kyle Browning all have experience and are solid players and will get a lot more opportunities.”

Kelly was Clemson’s top rusher in 2002 when he had 520 yards and scored a team best eight touchdowns. He enters this year with 888 yards rushing for his career, more than any other active player. Merriweather had 56 yards rushing in 16 attempts as a freshman last year, while Browning had 152 yards in 29 carries for a 5.2 yard average, best per carry figure on the team. Browning played in all 13 games and started twice, victories over Georgia Tech and Middle Tennessee. He scored a touchdown on a “Panther Play” in the win over Tennessee in the Peach Bowl.

Collins, a junior receiver from Commerce, GA, missed practice on Tuesday with a lower leg injury. He viewed the workout in a yellow jersey from the sidelines on crutches. He suffered the injury at some point during Monday’s practice, but finished the entire day’s activities, including conditioning runs at the end of practice. He had swelling overnight and was held out on Tuesday.

Collins, at 6-4 and 220 pounds, is a candidate to replace Kevin Youngblood, who led the Tigers in receptions last year with 70. Collins had four catches in 168 snaps, but did play in all 13 games a year ago. He had two touchdown receptions in Clemson’s spring game.

Another wide receiver who was limited in practice on Tuesday was Curtis Baham, also a junior. Baham worked in a green jersey on Tuesday and hopes to be back to full speed by the end of the week. Tight end Kevin Burnette also was in a yellow jersey. A letterman last year, Burnette is attempting to come back from a torn ACL suffered last spring. He should be back in action some time this fall.

“We had some goal line work at the end of practice and it was spirited. I saw enthusiasm out there today and there was good leadership.”