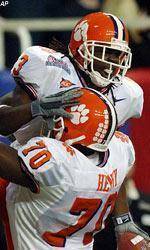 Clemson starting cornerback Duane Coleman has received an academic waiver from Clemson University and thus will be eligible to play for the Tigers this fall even if he has not earned his undergraduate degree by the end of summer school.

Coleman was a partial qualifier when he entered Clemson in August of 2002. Under NCAA rules, a partial qualifier is required to earn an undergraduate degree prior to the beginning of the fifth year of eligibility. The waiver allows Coleman to play his fifth season without first earning his degree.

Coleman is listed as a starting cornerback on the Clemson depth chart. The native of Naples, FL has played both running back and cornerback at Clemson and is on pace to become the first player in Clemson history to record 50 tackles and catch 50 passes in a career.

Coleman had 35 tackles last season when he started the last three games at cornerback. He had 21 of those 35 tackles in the three games he started, including nine in the 35-14 win over Florida State when he was Clemson’s top tackler. Additionally, Coleman had 12 kickoff returns for 249 yards in 2005.

He was Clemson’s top rusher in 2003 when he gained 615 yards on the ground and scored five two touchdowns. He also had 309 yards receiving, making him just the second player in Clemson history to record 600 yards rushing and 300 yards receiving in the same year.