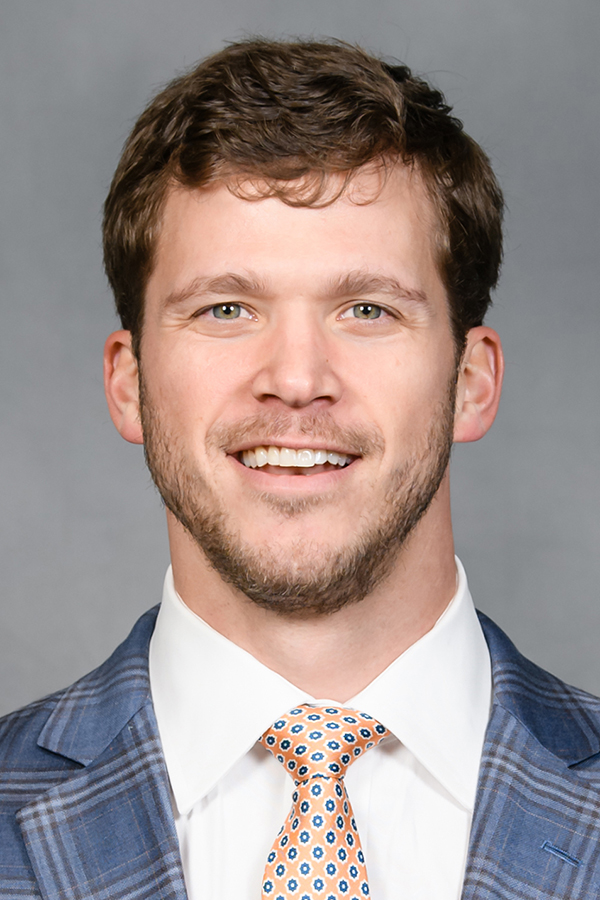 • Added the role of recruiting coordinator following the 2021 season.

• Served as Clemson’s interim wide receivers coach for portions of the team’s bowl preparation in 2019 after Co-Offensive Coordinator/Wide Receivers Coach Jeff Scott was announced as the new head coach at USF. Scott returned after the early signing period to coach through the College Football Playoff.

• In addition to serving as an offensive analyst, he served as assistant camp director during the 2018 and 2019 seasons.

• Was a steadying force for a 2021 receiver corps that dealt with significant injuries and attrition that resulted in Clemson playing the latter portion of the season without the services of seven scholarship receivers. Clemson had 25 different players ­­— including 13 different wide receivers — catch a pass in 2021, the most in the Dabo Swinney era.

• Produced two All-ACC performers in his first season in 2020, placing Amari Rodgers on the first team and Cornell Powell on the third team. Clemson was one of only two schools with multiple selections at receiver.

• Helped Powell become one of the breakout stars of 2020 as a fifth-year senior, helping him record career highs in receptions (53), receiving yards (882), receiving touchdowns (seven) after entering 2020 with 40 career receptions for 329 yards and three touchdowns in his first four years from 2016-19.

• Prior to his full-time hire, six of Clemson’s 10 most-prolific passing yardage seasons in school history at the time had come during his time on Clemson’s support staff.

• Said Head Coach Dabo Swinney of Grisham’s hiring as the full-time wide receivers coach: “I’m just super excited for Grish. There’s never been a guy more prepared to be the receivers coach at Clemson than Tyler Grisham. He had a great four-year career here. Clemson fans certainly loved him. He had a lot of big moments and went on and grinded out a four-year NFL career… He’s ready and is going to do an unbelievable job for us. He’s going to be special.”

• Is a 2009 graduate of Clemson University, earning his bachelor’s in business administration and management. He later earned a master’s from Clemson in human resource development in 2016. He is one of six on-field Clemson assistant coaches with at least one degree from Clemson, joining Brandon Streeter (1999), Nick Eason (2001), Thomas Austin (2009), C.J. Spiller (2009) and Kyle Richardson (M.S. 2020).

• Was four-year letterman for the Tigers from 2005-08. He finished his career with 132 receptions for 1,390 yards and eight touchdowns.

• Native of Birmingham, Ala., who was an all-region selection while playing wide receiver, tailback, quarterback and defensive back at Spain Park High School in Hoover, Ala.