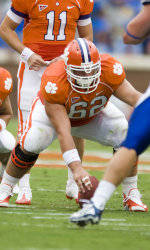 CLEMSON, SC – Clemson offensive line standout Mason Cloy has been nominated for the 2010 AFCA Good Works Team. Cloy is one of 112 nominees from all levels of college football who are looking to make the 22-man team. The team honors college football players who give back to their community.

If he makes the team, which will be announced in September, it would give Clemson a selection for the second straight year. Last year, current Tiger receiver Xavier Dye was chosen. Robert Carswell and Nick Eason are two former Tigers who were chosen during their Clemson careers.

Cloy, a red-shirt junior from Columbia and Spring Valley High School, has been active in community service since he first came to Clemson in 2007. He has been a part of Relay for Life, has visited patients in Greenville Memorial Hospital, visited a children’s home in Central, and made a presentation at an orphanage in Anderson, SC. He is a member of the FCA Leadership team known as Athlete Ministry, and went on an FCA mission trip to New Orleans two years ago. He has also served as a mentor to a middle school child in the area.

Cloy was an academic All-ACC selection in 2009, who is pursuing a double major in parks protected area management, and sociology with an emphasis in criminal justice. In June, Cloy began laying the groundwork to become an Army infantryman by taking part in a comprehensive program at Fort Knox, KY.

Cloy finished third on the Clemson team in knockdown blocks last year with 52 and he has 105 in the last two years. He started five of the 14 games on Clemson’s Atlantic Division Championship team. He suffered a broken leg in the ACC Championship game, but will be back on the field when the team opens fall practice on August 3.

Season and single game tickets are still available for the 2010 season and can be purchased online at ClemsonTigers.com or by phone by calling 1-800-CLEMSON.

Football
Clemson to Face Georgia in Charlotte in 2021 Season Opener