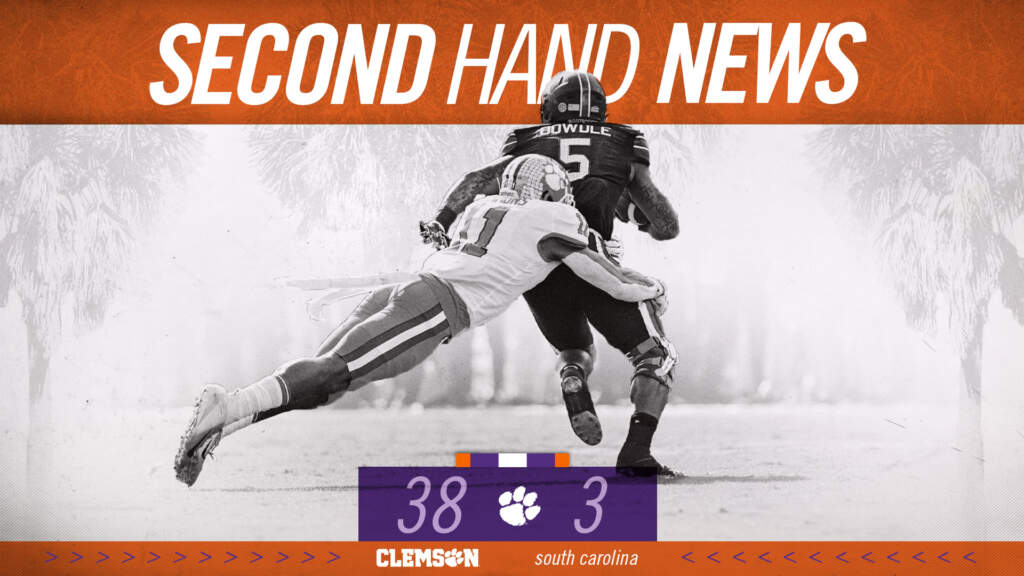 COLUMBIA, S.C. –  No. 3/3 Clemson defeated South Carolina 38-3 at Williams-Brice Stadium on Saturday afternoon, completing the eighth undefeated regular season in school history and the third time under Head Coach Dabo Swinney. The win marks the 27th consecutive victory for Clemson (12-0, 8-0 ACC) and the sixth in a row against the Gamecocks (4-8, 3-5 SEC). Travis Etienne (53) broke the ACC career total and rushing touchdowns record with a three-yard rushing touchdown in the fourth quarter.

Tee Higgins hauled in his ninth and tenth receiving touchdowns of the year, making him the first Clemson receiver to post back-to-back seasons of double digit touchdown receptions. Justyn Ross also added a 16-yard touchdown reception in the second quarter to give the Tigers a 21-3 lead.

The Clemson defense held South Carolina to only 174 total yards and only 73-yards in the second half. Derion Kendrick recorded his second interception of the season, and Isaiah Simmons added 10 total tackles, two of them being for a loss and a sack.

Clemson will travel to take on Virgina in the ACC Championship game on Dec. 7 at Bank of America Stadium in Charlotte, N.C. Kickoff is set for 7:30 P.M. on ABC.