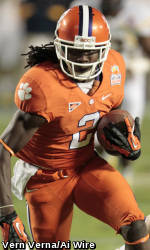 CLEMSON, SC – One of the new rules this coming season in college football is that kickoffs will now start at the 35-yard line as opposed to the 30 in 2011. The rule was put in place to limit the number of long returns as well as help cut down on the number of injuries that result from kickoff returns.

And though most of the kickoffs from this rule change will mean the majority of them will land in the end zone for touchbacks, Clemson kick returner Sammy Watkins says the rule will not affect the way he plans on returning kicks.

Watkins did concede he will take a knee if the ball carries 10 yards deep in the end zone, but overall, he says he is going to take the football out if it carries just one or two yards in. It’s no surprise he has that kind of confidence, the rising sophomore averaged 25 yards per return in 2011, including an 89-yard touchdown that turned out to be the winning score in a 56-45 come-from-behind victory at Maryland.

Watkins also had a 73-yard return earlier in that game.

“He is a special player,” Clemson Head Coach Dabo Swinney said. “He brings so many elements to the table for us.”

Watkins used those elements in 2011 to produce one of the best years by a freshman wide receiver in the history of the ACC. He finished second in the conference in receiving yards with 1,219 yards on 82 catches, including a school record 12 touchdowns. He also finished fourth in the NCAA and led the ACC in all-purpose yards on his way to be being named ACC Rookie of the Year and a First-Team All-American by the Associated Press, joining Herschel Walker and Adrian Peterson as the only freshmen to make the All-America team.

This year, Watkins hopes to add to those accolades as he has decided to offer his services and share duties with DeAndre Hopkins as a punt returner. The 6-foot-1, 200-pound receiver had only two official punt returns last year for 12 yards.

“I want to try and help us get good field position and maybe take one or two back this year. I think it will help make us a better team and better on special teams. It will make us better all over.”

It takes a different kind of football player to return punts. Unlike kickoffs, a punt returner is subject to harder hits because he has to keep his eyes up, finally getting them down after he makes the catch to see where the traffic is. It’s a high-risk, high-reward position.

Watkins knows all about that. In that same game against Maryland, he took his eyes off the football for just a second when he tried to look at the coverage team on a punt early in the game, and that split second caused him to muff the punt, as it bounced off his shoulder and into the arms of a Maryland player at the Clemson eight yard line.

The Terps scored on the next play to take a 14-3 lead in the first quarter.

“That’s my biggest fear,” Watkins said. “Once I see the guys blocking and holding guys up, that’s when I get back there and start going. I don’t really want to get back there if I can’t depend on them or trust them.

“But, I see guys out there working every day and getting better. The coaches are coaching them hard on that. That’s the biggest thing we can do. I don’t think we had many punt return yards last year, but I just told the guys, just like I did on kick returns, `You make two or three blocks here and there, then maybe I can take it for a touchdown.’ “