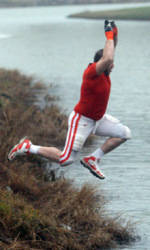 CLEMSON, SC – Landon Walker lined up at the bank of the moat adjacent to the practice fields Wednesday afternoon and took a big deep breath. Then he jumped in. When he came out the other side a few minutes later, the Clemson offensive tackle was covered in black mud that he dug up from the bottom of the moat during his swim.

Though even dirtier from the practice he had just wrapped up, Walker seemed fulfilled as he continued a tradition that has been going on at Clemson for quite some time now – seniors taking the “Moat Plunge” following their last football practice at Clemson.

“That’s kind of a rite of passage,” Clemson Head Coach Dabo Swinney said. “They have been here a long time and they have walked across this moat a long time. I’m happy for those guys. It’s always a bitter sweet day. They are finishing up their practice here, knowing you are not going to be on this field again with those guys.

“That’s kind of sad, but I’m happy for them. They have been a great group of seniors. There is no doubt they left this place better than they found it. They are leaving a great legacy here. But, they are not done. They have one more (game) to go.”

Fellow senior offensive linemen Mason Cloy and David Smith swam the moat as well. Reserve linebacker Daniel Andrews jumped in the moat too. Left tackle Phillip Price had the day off as did a few other seniors due to graduation Thursday morning. Defensive tackles Rennie Moore and Brandon Thompson both elected not to swim in the moat as well as defensive end Andre Branch.

“Oh no! I’m not swimming in there,” Moore said as he walked by a small group of writers.

With the annual Moat Plunge over, Clemson will take the rest of the week off for Thursday’s graduation and the Holidays. The team is scheduled to reconvene on Dec. 27 in Miami, FL where they will do the rest of their bowl preparations for the Jan. 4 Discover Orange Bowl at Sun Life Stadium.

“This is the type of finish they want to have,” Swinney said. “The challenge to them is to show back up on the 27th and be ready to lead one more time. Hopefully, they will lead us to another Orange Bowl victory and really go out in style.”

Practice this week went well for the Tigers despite the bad weather the last two days. It rained for much of Tuesday’s practice and it drizzled all day Wednesday.

“They did not want to quite give it yesterday so we had one of those days where we had to pull it out of them a little bit,” Swinney said. “They responded. Today was a good practice. It was a lot of fun.”

At the end of the varsity practice, Swinney had the seniors coach the junior varsity for five periods, while the rest of the team ran. After that, the seniors got carried off the field and over to the moat.

Injury notes: Swinney says they limited Price this past week in practice, but he has been coming along. With Wednesday off and now the next six days off before the Tigers return to practice, Swinney expects his senior left tackle to be ready to go for the Orange Bowl.

The only other injury of note, Smith has an injured toe, but Swinney expects him to be fine by the time they get to Miami. Smith, a reserve offensive lineman, has been held out of practice the last two days.

Day off: Jaron Brown, Chad Diehl, Mansa Joseph, Dalton Freeman, Dawson Zimmerman and Price were all given the day off from practice Wednesday as part of a tradition all graduates receive. They are all scheduled to graduate Thursday. Moore, Branch and Kantrell Brown will also graduate Thursday, but they took Tuesday’s practice off in order to get things done before graduation.

“I’m really proud of all of those guys. That’s what it is really all about,” Swinney said. “The football part of it kind of makes it a little bit more fun, but ultimately it is about achieving that great goal. I could not be happier for those guys knowing they are leaving here prepared for whatever comes their way.”