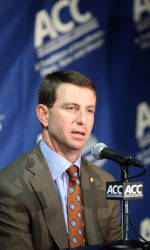 Instead Swinney was talking about playing in the ACC Championship game, where he and his 20th-ranked Tigers will play No. 5 Virginia Tech at Bank of America Stadium Saturday night at 8 p.m.

“This was our goal to be in this game,” Swinney said Friday as part of the ACC Football Championship press conference. “Our goal was to get back to Charlotte, but to be competing for an ACC Championship. It’s a privilege to be representing the Atlantic Division. It has been a hard fought season by all the teams in this conference and Virginia Tech is an incredible opponent.”

The Hokies (11-1) are the defending ACC Champions and are looking for their fifth conference title since joining the ACC in 2004. They are also riding a seven-game winning streak, a streak that began after their 23-3 loss to Clemson back on October 1.

“I hope we are a better football team then we were then,” Virginia Tech Head Coach Frank Beamer said. “Clemson is a great football team and we know we are going to have to come and play.”

Virginia Tech got to the ACC Championship game for the second straight year and for the fourth time in the last five years by beating Miami, Wake Forest, Boston College, Duke, Georgia Tech, North Carolina and Virginia. The most impressive of those wins was last week’s 38-0 victory over the Cavaliers. Virginia had come in to that game playing as well as anyone and a win over the Hokies would have sent them to Charlotte.

But Virginia Tech held the Cavaliers to 211 total yards and to only 30 net rushing yards.

“They are playing really good right now, and they are playing with a lot of confidence,” Clemson tight end Dwayne Allen said. “It’s going to be a big challenge for us.”

One of the reasons they are playing so well is due to the confidence quarterback Logan Thomas has been playing with. Since the October 1 game with Clemson he has been on fire, throwing for three touchdowns and running for two in wins over Miami and Georgia Tech. He also threw two touchdown passes against North Carolina and ran for another in the win over the Tar Heels.

Thomas needs just one rushing touchdown to tie a Virginia Tech record for touchdowns in a season by a quarterback. He currently has 10 and the record is 11 by Bruce Arians, which he set back in 1974.

“He is also running quarterback sneaks for 12 yards. He has really gained a lot of confidence and has been a real key for their football team. They have done a great job using him in the running game. His confidence has grown and they have done a few things different in the passing game, but more than anything he has become an accurate passer.”

Though Swinney and the Clemson defense will be concerned about Thomas and the Hokies, his main concern will be finding a way to find the magic his team had during an eight-game winning streak to start the season.

“It’s a game of execution and performance, and we’ve had a hard time getting 11 guys to pull the rope in the same direction every play,” Swinney said. “That’s what it takes to win and to consistently win. You know, the biggest thing for us, and I’ve said it many times, the last four games we’ve had 12 turnovers, and we’ve created zero in the last three.

“I think we’re minus 10 in turnover margin, and before that kind of slide came, I think we were plus nine. So you’re talking about a drastic, drastic change in that category. There are always things to improve upon, but until that’s corrected, you’re just sledding uphill. So that’s been the biggest thing. We were 8-0, and we had six turnovers.”