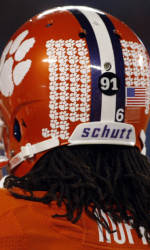 ClemsonTigers.com Exclusive: Tigers Honor No. 91 With First ACC Title Since ’91

Knowing that most of the 2011 Tigers did not know McGlockton, Trapp wanted them to know how big of a Clemson fan he was and how when he played the game he gave it all he had and never let up.

Trapp told the team they were going to wear a black No. 91 sticker on their helmet and anyone who did not play the ACC Championship game like McGlockton did during his football career, he was going to personally rip the sticker off their helmet.

“He told us if you were going to wear the No. 91 sticker on your helmet, then you had to play relentless,” Clemson defensive end Andre Branch said. “If you are not, then take the No. 91 off your helmet. He said if he sees anyone who is not playing hard, then he will take it off.”

There was no need for Trapp to do that. His Tigers played relentless, especially on defense as 20th-ranked Clemson held ACC Player of the Year David Wilson to 32 yards on 11 carries, while forcing three turnovers as the Tigers won their first ACC title in 20 years with a 38-10 victory over No. 3 Virginia Tech at Bank of America Stadium in Charlotte.

“We were accountable,” Clemson Head Coach Dabo Swinney said. “We played our gaps. We had guys lined up where they were supposed to. They took ownership in the plan. We tackled well. We created pressure, and we just said we’re going to stop the run tonight, and I’m just really proud of them.”

Clemson, who advanced to the Orange Bowl for the first time since 1981 with the victory, honored McGlockton with one of its best performances of the year in all facets of the game. While the defense limited the Hokies’ potent rushing attack to 56 yards, the Clemson offense gained 457 yards, including 217 on the ground against a defense that was yielding just 98.1 yards per game coming in.

On special teams, the Tigers controlled field position, while Chandler Catanzaro made his sixth straight field goal and his 20th of the season – just the eighth Clemson kicker to reach that plateau.

Especially in the third quarter when the Tigers scored three touchdowns in four minutes and 24 seconds to take a 10-10 halftime score and make it a 31-10 blowout. And in an effort that would have surely made McGlockton proud, the Clemson defense forced three straight three-and-outs to open up the second half, and then recorded two fourth-quarter interceptions to seal it.

“Our players honored him tonight. I promise you, Chester would have appreciated how that defense played tonight,” Swinney said. “They were outstanding. Chester McGlockton ironically was No. 91, and it’s been since ’91 since we’ve been the ACC champions. I’m just really happy for our players and how they honored him tonight.”