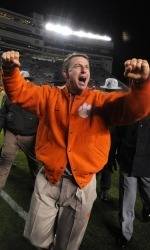 BLACKSBURG, VA – Just seconds after Dabo Swinney gave Clemson Athletic Director Terry Don Phillips the game ball for believing in him, tight end Dwayne Allen stood up and surprised his head coach with one of his own.

“I want to give this game ball to a guy that was a skinny, walk-on wide receiver from Pelham, Alabama, who believed he could do anything. He became a starter on a national championship team at Alabama, and that same guy has believed in us… I’m giving this game ball to Coach Swinney,” Allen said.

Swinney’s game ball recognition goes back long before Saturday’s 23-3 victory at No. 11 Virginia Tech. It started last New Year’s Eve, when he stood in front of his team following a loss to South Florida in the Meineke Car Bowl and told them, “I’m going to fix this.”

Swinney fixed things by first hiring Chad Morris as his new offensive coordinator in January, and then by landing one of the top recruiting classes in the country, which included freshman sensation Sammy Watkins, one of the nation’s top receivers.

Then he sold his team on the opportunity that stood right in front of them – a schedule that opened with five consecutive national, conference and divisional champions. Swinney, using his One Team, One Dream, One Clemson motto, got his players believing they could win and in doing so inspired his Tigers to three consecutive wins over ranked opponents – a first for an ACC school.

After wins over Sunbelt and Southern Conference Champions Troy and Wofford, Clemson (5-0, 2-0 ACC) ended the nation’s longest winning streak at 17 games with a 38-24 win over then No. 21 Auburn, the defending National Champion. The Tigers followed that up by beating ACC preseason favorite and No. 11 Florida State, 35-30. Then came Saturday night’s dominating performance against defending ACC Champion Virginia Tech in Blacksburg, VA.

In beating the Hokies on both sides of the line of scrimmage, 13th-ranked Clemson ended Virginia Tech’s 12-game conference winning streak and its 15-game regular season winning streak.

That character, and inheriting Swinney’s belief that “you can accomplish anything that you put your mind to,” has made Clemson one of the best stories in college football this season.

“I just can’t be more proud of them.”

And his players can’t be any prouder of him, and that’s why they gave him his first game ball as a head coach.

“This is special because the players gave this to me,” Swinney said as he held the ball in his right arm. “I just walked out of (the locker room) and I’m not letting it go. This is my first game ball as a coach and that is special.

“I’m just really proud of them.”