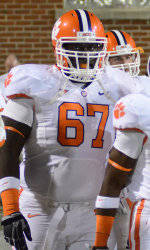 ClemsonTigers.com Exclusive: From the Pitch to the Football Field, Davis Likes to Shock the World

CLEMSON, SC – At 6-foot-4, 326 pounds, it’s hard to imagine Kalon Davis doing anything with a soccer ball. But, that’s exactly what the Clemson offensive guard has been doing since he was three years old.

Davis has not only played soccer, but he is pretty good at it, starting for his intramural team this spring when he is not on the practice fields playing football.

“It’s just a lot of fun,” Davis said following Monday’s practice. “It is something I have done since I was little. I really enjoy being out there.”

He should. Davis actually has become pretty good at soccer. At Chester Senior High School in Chester, SC, he played for three seasons, while earning a spot as a starter in his last year. When looking at Davis’ intimidating figure, it’s understandable to think he was a midfielder or a defender of some sort, but in fact, he was a forward, putting him in fine position to strike the ball or set up a score with a pass.

It’s not exactly what one might expect from a guy who plays on the offensive line for a major college football team. In his final season at Chester, Davis scored two goals and had five assists as he started five games as a forward, while four others in goal.

“I heard about him playing soccer when he first came here, and then I saw his feet, and I noticed he is pretty good for a big guy so I could tell he was probably pretty good out there on the soccer field,” running back Andre Ellington said. “That’s hard to believe he was that good, though.

“That’s crazy. You know that has a lot to do with him having good feet. He does a pretty good job. He is pretty good on the offensive line, too.”

These days, Davis still likes to get the ball when he is on the pitch, and he still knows how to make things happen with his feet.

“I play forward a lot because most people don’t expect me to have very good ball skills. I like to shock the world when I go out there,” he said.

Davis hopes to do the same on the football field this fall as he is battling for the starting job at left guard as a red-shirt sophomore.

Imagining Davis playing soccer or even left guard along the offensive line seemed impossible two years ago when he enrolled early for spring football practice and weighed nearly 375 pounds. After getting his weight down a little, he suffered another setback when he injured his back and had to have surgery.

The back surgery forced him to sit out the entire 2010 season, further hurting his progress to get better. But Davis persevered, and got himself on the field at times during the Tigers run to an ACC Championship last fall.

The left guard played in 12 games in 2011, including seven of his 49 snaps in the ACC Championship game. His numbers were not eye popping by any means, but he was back on the field trying to help, while also learning to get better.

Where Davis is now, is working the majority of the snaps with the first team offense. Though he still has a ways to go, the Tigers’ new left guard has made big strides just to put himself in this position. This time last year, he weighed about 340 pounds.

This spring, Davis continues his development as he has dropped more weight and gained more muscle. He now sits at 326 pounds, just a pound above his heavy target weight of 325.

To keep his weight down, Davis says he watches what he eats thanks to the help of Performance Coordinator Dr. Loreto Jackson. He also has started to cook, occasionally cooking his own breakfast, while also learning the art of cooking Japanese cuisine.

“That’s healthy,” Davis said jokingly. “With my cooking and the fact I play soccer, I’m the last person you would expect to play football, but I enjoy being out there. I will not complain.”

He also enjoys the challenge he faces this spring, especially now that all eyes are on him.

“This (spring) definitely has a different feel than last year,” he said. “There are a lot more reps. I feel like there are a lot more eyes on me. So I’m just trying to prove that I deserve to be there because I know they are watching me and watching every move I make. I cannot have any drop off.

“I’m trying to be more consistent. Last year, they would press me one day, and then the next day I would fall off. They would come out here wondering, `which Kalon are we going to see today?’ I’m now trying to prove that I deserve to be out there on every snap.”

Just like he does every time he goes out to play soccer.