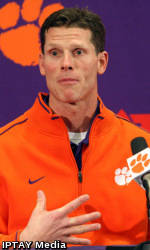 CLEMSON, SC – Clemson Head Coach Dabo Swinney said there were a couple of men he interviewed for his vacant defensive coordinator position that were what he classified as “home runs.” However, when he met Oklahoma’s Brent Venables, he knew he had something better than a home run.

“Brent is a grand slam,” Swinney said Friday afternoon as he introduced Venables. “The bases were loaded. If you can get them all in instead of just one that’s what we went after. We hit a grand slam.”

Venables comes to Clemson after spending 13 years at Oklahoma where he helped it win the National Championship in 2000 as the co-defensive coordinator. He became defensive coordinator and linebackers coach in 2004, a position he held until being named to the same position at Clemson on Friday. The Sooners won seven Big 12 Championships in his 13 years with the program.

But Venables resume isn’t the reason Swinney took a liking to his new defensive coordinator. There were more than just Xs and Os. He liked the way Venables fit Clemson and the way Clemson fit Venables. The 41-year-old himself said there was just something to Clemson that hit him when he and his wife. Julie arrived here last weekend.

“I had never been here before, and obviously when you come to a new place you are going to have reservations, but immediately things stuck out to me,” Venables said.

One of those was the kind of job Terry Don Phillips has done as Clemson Athletic Director. Venables has known Phillips from when Phillips was the athletic director at Oklahoma State and competed against his teams in the Big 12.

“I knew what kind of leadership he had, and then I saw it when I got off the plane here. I already knew what he had done in Stillwater (OK), and I saw the same things taking place here,” Venables said. “Going through this facility, the first thing that jumped out to me was the pride in this place.

“Obviously, there is a rich history and tradition with Howard’s Rock, the Hill and Death Valley. I remember growing up and actually being scared when I thought what it would be like to actually compete against a place like Clemson. It just had this mystique to it. To be able to see it and the beautiful facilities that surround it was very, very special. Having been to the number of places that I have been to throughout my career, this is as good as it gets.”

The thing that intrigued Venables the most is that it can get better. He says Clemson is a place where the pieces are in place to win and he is looking forward to helping Clemson build of its 2011 ACC Championship.

“I have a lot of appreciation and a great perspective on what this opportunity is, what I value and what I’m looking for,” he said. “The spiritual side and the business side of me and trying to project the next 15 to 20 years of my career, I feel like coming to Clemson is more than a home run as well.

“For me and my family and certainly at this time in my career this is a great place for me… the stars did align for this to happen.” And now it’s time to go out and prove that Swinney did in fact hit a grand slam.

“We will win,” Venables said. “I have great confidence for all the obvious reasons. Location, players, leadership, passionate fans, the facilities and the eagerness and willingness to work for it; we have all of that. I really feel like the needle is pointed in one direction. I sense that with this group of coaches, they are quality men, they are quality leaders and are experienced at winning and success will follow.