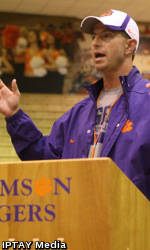 CLEMSON, SC – Anytime Clemson hosts a football camp and the threat of severe weather threatens the area, they move everything inside to Jervey Gymnasium.

“It used to be lightning could strike right here beside you before they would stop practice,” Clemson Head Football Coach Dabo Swinney said. “These days, it can be sunny and not a cloud in a sky, but if lightning is within 15 miles of the area, they are going to send you in.”

That, and coupled with the 20-hour rule–the required accountable activity student-athletes can have within its chosen sport–Clemson decided it was time to take its practice facilities up another notch as it officially broke ground on the football program’s indoor practice facility Friday.

Ironically, threatening weather in the area brought the groundbreaking inside Friday afternoon, and in the way only Swinney can, he pointed out to President James Barker, Athletic Director Terry Don Phillips, IPTAY’s Board of directors as well as those who gave money to the capital campaign – that there is definitely a need for an Indoor Practice Facility.

“I don’t know why you moved this thing indoors? I guess you were worried about the rain,” he joked. “There is no better time to talk about an indoor facility than when we have to move something inside because of weather.”

The Indoor Practice Facility will feature a regulation-size artificial turf football field, a coach’s tower and video platforms. The building will have large garage-style doors, which can be raised to create an open-air space.

“I just want to thank everyone for the support and the ability to make this building a reality,” Swinney said. “I want to thank IPTAY for their unbelievable support for everything they do athletically at Clemson.

“This facility is another step in that direction and it will truly be a difference maker for this school.”

The estimated cost of the Indoor Facility is $10 million. Phillips says the new building, which will be located behind the Jervey Athletic Center where the turf practice field is currently, should be completed by December of this year.

“This is critical. We need to have this facility,” Phillips said. “The points Dabo made about the 20-hour rule, hit right on the point. We only have so much time to get work done.”

The Clemson football program is heading into its third year inside the WestZone, which has helped Clemson upgrade its football program with state of the art locker rooms, weight rooms, meeting rooms and a recruiting center. Clemson will open a training table area in the WestZone this summer.

“When it opens, it will be a first-class facility,” Phillips said. “It will serve our needs very effectively. The indoor practice facility is another step in that direction.

“It is a very competitive world out there when it comes to facilities. Every school that we play has been very aggressive with facilities. It’s not only important to be good on the field, but you have to have the ability to recruit. Their eyes tell them a lot about what kind of commitment we are making.”

Barker says the groundbreaking of the indoor practice facility is another example of the commitment that has been made to make the Clemson football program one of the best in the country.