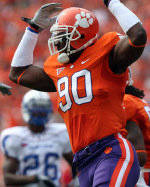 ClemsonTigers.com Exclusive: Brown Appreciates Every Opportunity He Gets

CLEMSON, SC – He was on his way back home from practice in the fall of 2009 when a near-death experience changed the way Kourtnei Brown looks at life.

Brown, who will run down the Hill for the final time this Saturday when No. 9 Clemson takes on Wake Forest at noon in Death Valley, was driving his moped that afternoon and was not paying attention as he was merging into traffic; and at the last minute swerved to avoid the curb.

But he hit the curb anyway with his back tire, and lost control of the moped and was thrown into the middle of oncoming traffic.

“I rolled, and I remember closing my eyes and saying, `Lord help me!’ I thought it was over because there were cars coming,” Brown recalled. “But, God had his angels around me and protecting me. That was very life changing.”

Somehow, the oncoming cars all avoid Brown, and he left the accident with no life-threatening injuries. All he injured was his arm and had some cuts and bruises on his face and hands.

“That was very life changing. When you come here and you are surrounded by fans and coaches and everything, you kind of think you’re untouchable or you have this long life ahead of you,” the fifth-year senior said. “That accident really woke me up and just like that it showed me that I could be dead.

“It made me look at life and everything else differently.”

It’s not that Brown had a troubled spirit or anything like that. In fact, he has always been thankful for his talents and the opportunities placed upon him. Besides his football skills, he is also good with impressions, which he demonstrated to the media earlier this week. He one day hopes to get into the entertainment field and do voiceovers for cartoons and such.

Before the moped accident, he had already decided, along with Head Coach Kevin Steele, to redshirt the 2009 season so he could concentrate on getting better and stronger at his position. What he did not figure was that in the same year he made a commitment to get better, he would experience something that changed the way he did everything in his life.

“I learned not to take anything for granted,” he said. “It is a blessing to wake up. It’s a blessing to walk, run and talk. There are some people that don’t get that. It showed me, not that I was not thankful already, but it made me appreciate it more.”

That’s why, when he scooped up a football and raced 26 yards for a touchdown in the Tigers’ 59-38 victory over North Carolina on Oct. 22, Brown was thankful. It was the North Carolina native’s second touchdown of the afternoon, as he took an interception he tipped to himself 20 yards for a score in the second quarter as well.

He became the first Clemson defensive lineman since 1954 to score two touchdowns in the same game.

When he got home that night and talked with his mother about what all happened in the North Carolina game, the conversation went back to the day he almost died, as well as to the day last spring when what looked like a serious knee injury turned out to be a minor sprain.

“We talked about the accident with the moped. Even with last spring when I hurt my PCL. I was like, `God blesses me.’ His hand is on my life,” Brown said. “If that would have been a real bad knee injury at practice that could have been it, my career could have been done.”

But it isn’t, and Saturday Brown will have the opportunity to touch Howard’s Rock and run down the Hill with the other 18 seniors one final time. He will also have the opportunity to be a part of a team that can clinch a second Atlantic Divisional title in three years as well as finish undefeated and untied at home for the first time since 1990.

“I have a lot I can thank God for,” Brown said.