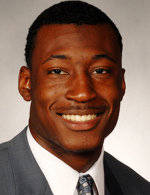 Clemson’s Kourtnei Brown Nominated for Defensive Performance of the Year

CHICAGO, IL – Clemson’s senior defensive end Kourtnei Brown is nominated for the Defensive Performance of the Year, Intersport announced on Sunday. The Defensive Performance of the Year is part of a four-month competition that lets fans determine which individual performances reign supreme during the 2011 college football season. The winners will be revealed during the two hour All-Star Football Challenge special airing at 7:00 p.m. ET on February 3 on ESPN2.

From now until the end of Bowl season, the two defensive performances of the week will be featured on the All-Star Football Challenge Facebook page, along with two top individual performers among quarterbacks, running backs and receivers. The top weekly vote-getter will proceed to the finals, which run January 19-25.

Brown helped the Tigers remain unbeaten with an athletic interception of UNC’s Bryn Renner which he returned for a touchdown late in the first half of Clemson’s dominant 59-38 win. Brown capped the victory with a 26-yard fumble recovery for a touchdown and added two tackles as well. Clemson is 8-0 for the first time in 11 years and looks continue its roll in next week’s matchup against Georgia Tech.

The other week seven nominee for Defensive Performance of the Year is JoJo Nicolas of Miami (FL). Nicolas helped the Hurricanes upset Georgia Tech by recovering a fumble in the end zone and grabbing an interception in the Canes’ 24-7 win.

To learn more about any of these incredible performances and to vote for any of the nominated players, visit www.facebook.com/AllStarFootball. Fans can vote as often as they would like in each category and can share their vote with Facebook friends. Week seven voting opened today and ends on Sunday, October 30, at 9:59 AM ET.