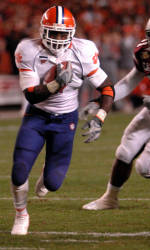 Clemson, SC – Clemson running back James Davis, the school’s number-two career rusher and touchdown scorer, has decided to enter the NFL draft and forego his senior season. Davis made the announcement on Wednesday.

“This was a tough decision,” said Davis, a native of Atlanta who started the last three years at running back for Tommy Bowden’s team. “I want to thank Coach Tommy Bowden’s and all the coaches for the opportunity to compete at the highest level of college football.

“Everyone at Clemson has been very supportive in my development, whether it be as a player or academically. I will return some day to earn my degree. That is very important to me and my family.

“But, in evaluating my current overall situation, I think this is the best decision for me and my family. I have enjoyed my experience here and will always be a Clemson Tiger.”

Davis finished this past season with 1,064 yards on 214 carries, his second consecutive 1000-yard season. He joins Raymond Priester and Woody Dantzler as the only players in school history with two 1000-yard seasons.

Davis finishes his career with 12 career 100-yard rushing games, also second in school history. He ranked fourth in the ACC in rushing as a freshman, third as a sophomore and second as a junior. He had a career high 1187 rushing yards in 2006 and 879 as a freshman when he was the Most Valuable Player of Clemson’s Champs Sports Bowl win over Colorado.

“James had an outstanding career at Clemson and made a great contribution to our program on the field and in terms of team leadership,” said Clemson Head Coach Tommy Bowden’s. ” In our meeting today I recommended that he return for his senior year because I thought it would benefit his career. I am disappointed that he will not return for 2008, but I will do everything I can to help him as he prepares for his future.. I think he will have an excellent professional career.”