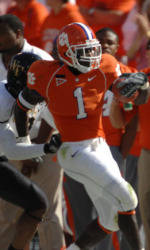 Clemson, SC – Clemson running back James Davis, the school’s number-two career rusher and touchdown scorer, has decided to return to school. Davis had announced on January 9 that he intended to turn professional.

But, on Friday, Davis faxed a letter to the NFL and Clemson University asking that his name be removed from consideration. “I James Davis of Clemson University hereby withdraw my name from the 2008 NFL Draft, effective immediately,” said Davis’s letter. Friday at midnight was the deadline for such action for underclassmen who had applied for NFL draft consideration. He will return to school on Tuesday. (Monday is the Martin Luther King holiday and there are no classes at Clemson that day.)

“He will certainly be one of the leaders of our team next year, just as he has been the last three years. His draft status will be much higher after another year at Clemson. He should be one of the top running backs in the nation next year.” Davis has been Clemson’s top rusher each of the last three years, the first Clemson running back to lead the Tigers in rushing for three consecutive years since Raymond Priester did it from 1995-97. He was first-team All-ACC each of the last two years, the first Clemson running back to be first-team All-ACC in consecutive years since Terry Allen in 1987-88. Davis finished this past season with 1,064 yards on 214 carries, his second consecutive 1000-yard season. He joins Priester and Woody Dantzler as the only players in school history with two 1000-yard seasons.

A two-time first-team All-ACC selection and ACC Rookie of the Year in 2005, Davis is second in Clemson history in career rushing with 3,130 yards. Priester has 3,966, so Davis will need 837 yards next year to break that mark. He has exceeded that total each of his first three years. He has scored 38 career touchdowns, including 36 rushing, second in school history in both categories to Travis Zachery, who had 50 between 1998-01.

Davis has 12 career 100-yard rushing games, also second in school history to Priester’s 15. He ranked fourth in the ACC in rushing as a freshman, third as a sophomore and second as a junior. He had a career high 1,187 rushing yards in 2006 and 879 as a freshman when he was the Most Valuable Player of Clemson’s Champs Sports Bowl win over Colorado.

James Davis on his decision to return to Clemson “I am so happy to return to Clemson. I want to thank my mom because we talked a long time last night. She has provided great support for me and she helped me work through this. “I knew today was the final deadline. I woke up last night at 3:00 AM and just thought about everything and thought about my future. Coming back to Clemson is just the right thing to do for me athletically and academically.”

Quote from James Davis “This is great news, it will be great to have him back. He is a tremendous player, teammate and a great leader. This will definitely help us in our ACC title hunt next year.”

Quote from James Davis “I am thrilled. We will have one more year of “Thunder and Lightning.” I supported James in his original decision, but we continued to talk. I think he just missed Clemson.”