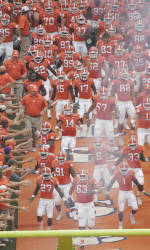 CLEMSON, SC – The upcoming 2007 football season is sure to be an exciting year for Clemson Football with the first home game played on Labor Day at 8:00 p.m. on ESPN. Tommy Bowden and his staff continue to improve team performance on the field, bring in exceptional young talent and welcome top-notch competition into Death Valley.

“Our season ticket prices will be $299 for IPTAY Donors this year, which includes a $24 WestZone contribution as recommended and endorsed by the IPTAY Board of Directors,” announced Clemson Senior Associate Athletic Director for External Affairs Bill D’Andrea. “The $299 season ticket price, including the $24 WestZone contribution, is exactly the same as the 2006 season and of course will include all seven home games at Memorial Stadium.

Sale of individual game tickets, Kickoff Packages and Mid-Season Packages will be available to non-IPTAY Donors only after all qualified IPTAY Donor orders have been filled.