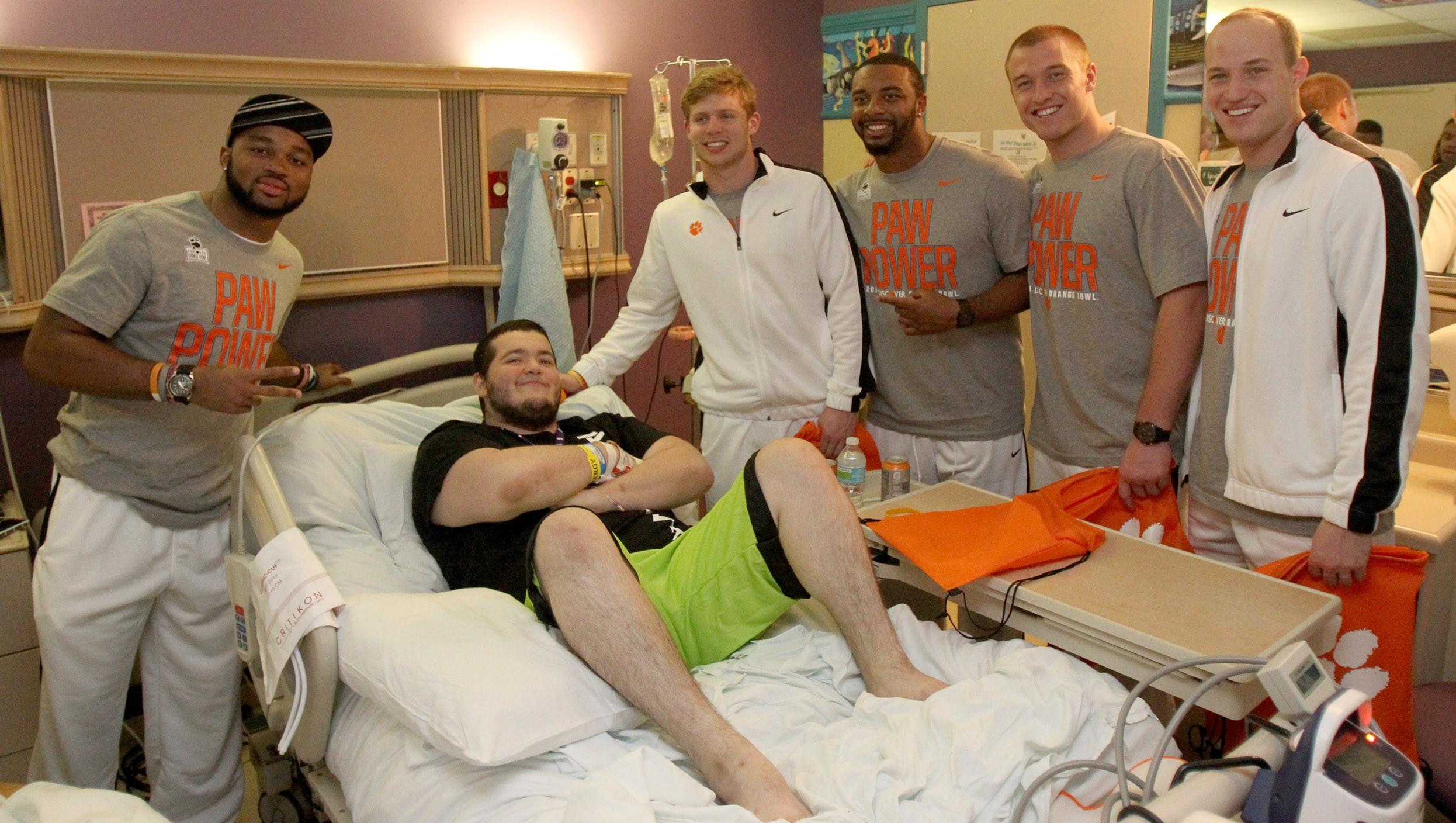 Clemson’s seniors practiced for the last time as Tigers on Wednesday afternoon at Barry University with only two days left till they close out their college careers in the Orange Bowl.

“At the end of the day, it’s more than just football. It’s about building a foundation and helping other people,” said senior running back Rod McDowell. This afternoon, the Tigers visited children at Baptist of Miami and “Hot Rod” is right—it’s a great pleasure seeing our student-athletes enrich their community.

“Our program is already on the map, but it will really help us getting a big BCS win down here in Miami.”

MIAMI, FL – Clemson’s seniors practiced for the last time as Tigers on Wednesday afternoon at Barry University with only two days left till they close out their college careers in the Orange Bowl.

Senior running back Rod McDowell, one of seven remaining members of Swinney’s first signing class, which he dubbed “The Dandy Dozen,” said he believed his class would be remembered for more than just winning games.

“It’s a bittersweet feeling, but at the end of the day, it’s about what you left here — your legacy,” McDowell said. “What’s your legacy going to be? And I feel like my legacy is going to be a dude who fought when all odds were down, that he never gave up, that he got his degree.

“It’s more than just football. It’s about building a foundation and helping other people.”

Of course, the 2013 senior class has made plenty of impact on the field, as well.

After suffering through a 6-7 season as redshirt freshmen in 2010, they have won 31 of 38 games over the past three years since, and even with one losing season, have a 37-15 record over their careers, which is the most wins for a senior class at Clemson since 1991.

“It’s a bittersweet time, I think, for all those guys because they’re excited to move on and they’re excited for what’s next, but they’ve enjoyed their time here and they’re proud of what they’ve gotten accomplished here,” Swinney said. “I think they all feel good about the foundation that’s in place, and I don’t have any doubt that they’re all going to go on and be great successes in whatever they do.

“I think they’re looking forward to enjoying the opportunity to be together one last time, but I think the thing that’s heaviest on their minds right now is winning this ball game.”

Of course, breaking records is nothing new for this bunch.

Tajh Boyd already holds virtually every passing mark at Clemson, and a victory over the Buckeyes would give him 32 wins as the Tigers’ starting quarterback, which would tie him with Rodney Williams (1985-88) for the school record in that regard.

“He’s set the standard, he really has,” Swinney said. “When you look up every record in the book at Clemson, it says Tajh Boyd. And it’s not all about that, it’s also about how he has represented this program, how he has embraced being the face and voice of the program and has taken pride in that.

“If you’re going to be the quarterback at Clemson, everything counts. And Tajh Boyd has done a tremendous job.”

Asked how it felt to only have one game left at Clemson, Boyd said he has had little time to think about it between trying to prepare for the bowl game and also get set for life after college, when he will begin training in earnest for the Senior Bowl, the NFL combine and a professional career.

And Boyd confirmed that going out with a victory is tremendously important to him.

“Most definitely, I think it would end this season on a high note,” Boyd said. “And I’ll leave this university and this campus happy and just remember the times that I had here. It’s an important one from that aspect, as well.”

Place-kicker Chandler Catanzaro wasn’t a member of “The Dandy Dozen,” as he came to Clemson as an original walk-on. He has been the Tigers’ starting kicker since his freshman season, however, and has more than earned his scholarship.

Catanzaro is the school’s all-time leading scorer and second in ACC history with 400 career points.

“Our senior class is something special, I think,” Catanzaro said. “We’ve got some special guys, and we’ve seen the valleys and the peaks of these four years. I think we’ve definitely established a consistency here, and it would be very meaningful for our group to capitalize in this game on the opportunity and send us off with a win. That’d be huge. It would be a testament for all we’ve worked for these four or five years.”

McDowell, meanwhile, has waited his turn to become Clemson’s starting running back, first behind C.J. Spiller, then Jamie Harper and Andre Ellington. This season, he’s accounted for 46.1 percent on the team’s rushing yards and needs 44 more in the Orange Bowl to reach 1,000 for the season.

“Our program, we’re used to winning,” McDowell said. “Coach Swinney, he told us when he got the job that a change was coming. It was time to win, and that’s what we’re doing.

“When you get accustomed to winning games and playing big-time opponents, when it comes time to play in big-time games like the Orange Bowl, you know what the coaches expect from you and what the players expect from themselves.

Make it to a BCS Bowl, get a Presidential-style police escort everywhere you go around town: https://t.co/uxuqve03dI

When Taylor Watson got ready to hop on the Tigers @OrangeBowl bus, he saw something he recognized–his face! Watch: http://t.co/rw2yU2EHZy

VIDEO: Boyd picked Tigers over Buckeyes thanks to McDowell

Did you know Tajh Boyd was almost a Buckeye? With Clemson facing Ohio State in the Discover Orange Bowl on Friday, the story of Boyd’s decision to choose the Tigers came up during a press conference on Monday. And Boyd explained that fellow senior and current running back, Roderick McDowell, played a major role in recruiting him to play in Death Valley.

Watch McDowell and Boyd tell the story themselves: