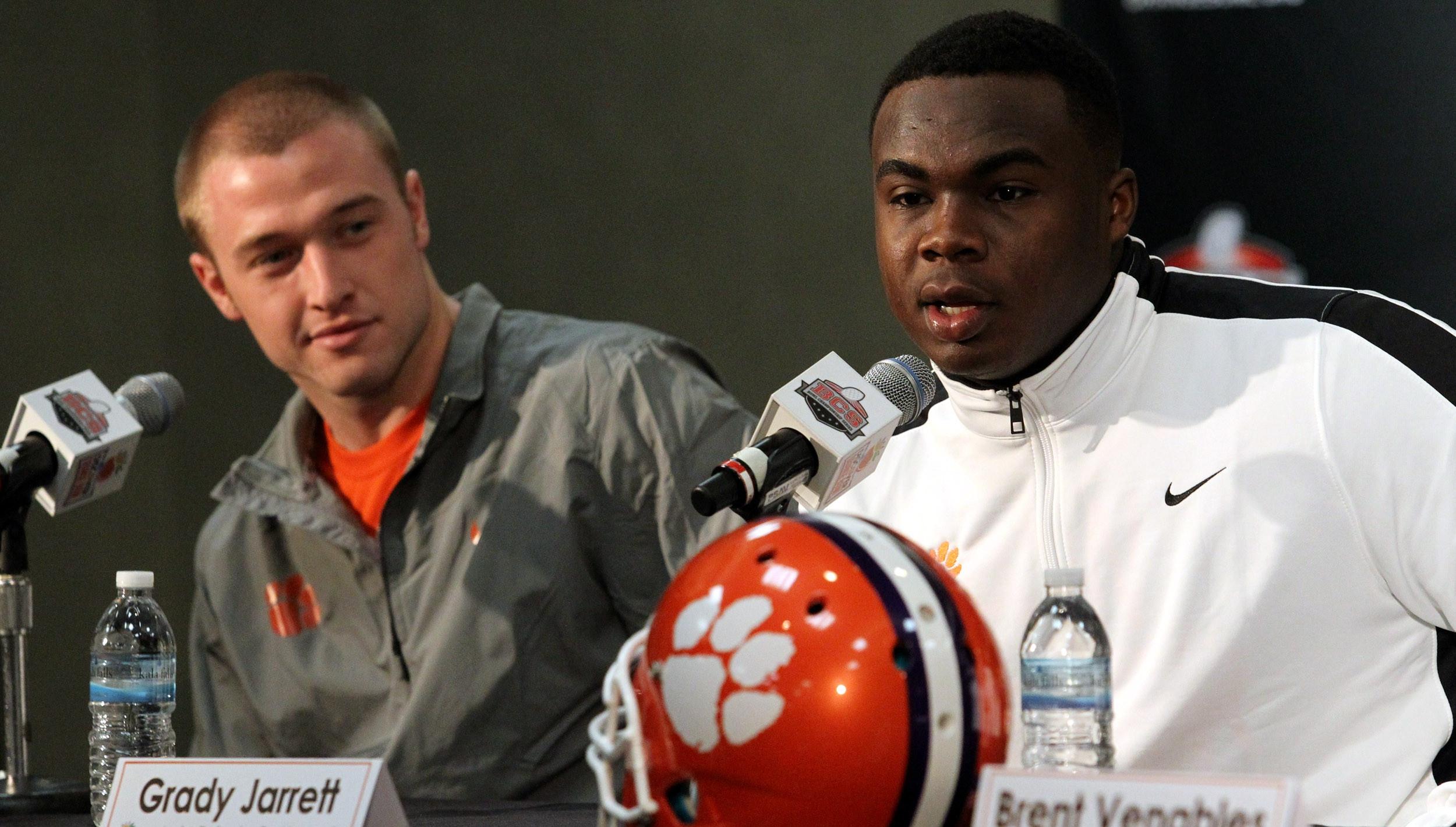 MIAMI, FL – Coaching staffs often get together in the offseason to compare notes and pick each other’s brains about X’s and O’s. It doesn’t usually happen between teams that will be squaring off in the upcoming season, of course.

That will be the case for the combatants in the Orange Bowl on Friday, however, as Ohio State offensive coordinator Tom Herman and his staffers spent two days in Clemson last spring talking shop about the finer points of their spread offenses.

“We didn’t know we were going to end up playing each other in the bowl game,” Tiger head coach Dabo Swinney joked after his team practiced Tuesday afternoon. “We lied to them, though, on a lot of stuff.”

Kevin Sumlin and his Texas A&M staff were also set to attend the meeting, but had to back out at the last minute, so it ended up being just Swinney and his offensive staff with Herman and other Buckeye offensive staffers.

“We just talked ball for a couple days, so it was really good and beneficial,” Swinney said. “Hopefully they told us a bunch of good stuff.”

The primary reason the two staffs wanted to get together is because the principles of their spread offenses are so similar.

“They’re very similar in the run game,” Swinney said. “They do a lot of the same things in the run game, especially with the zone read, with the quarterback power, the quarterback counter, all those things. They’re a little different in just some technical things. But it’s been great – just as I’m sure it’s been great for them trying to prepare for this game – because there are a lot of schematic similarities.”

On the surface, it might seem like the two offenses don’t have much in common – with the Buckeyes being known for their ground game featuring 1,000-yard rushers Carlos Hyde and Braxton Miller and Clemson known for its aerial attack with the record-setting combo of Tajh Boyd and Sammy Watkins.

But Swinney said those differences had more to do with personnel than scheme.

“We’ve tried to strive for a little bit of balance in the last few years, but this year we’ve been a little more heavy toward the passing game. But it’s all designed to give us the best chance to win.”

To prepare for Ohio State’s dynamic quarterback, redshirt freshman Nick Schuessler has been playing the part of Miller on the scout team, although Swinney said no one would ever confuse the two players on the field.

“He does great throwing the ball, but nobody’s going to mistake him for Braxton Miller running the ball, that’s for sure,” Swinney joked. “He tries hard.”

Clemson defensive coordinator Brent Venables had been asked earlier in the day at a news conference about preparing for Ohio State and the similarities between its offense and the one they went against in practice with their own spread attack.

“It’s funny. We say it all the time in our meeting. It’s not just them. It’s a lot of these offenses that you’re seeing,” Venables said. “You watch the 49ers with (Colin) Kaepernick, it’s like all these boys went to the same retreat, the same clinic, and they’re stealing ball plays from each other. There are definitely some similarities, but there are always tweaks. And we’re going against a scout team every day – and our scout team, it’s hard for them to emulate, truth be known, because of the sheer physical ability and certainly the speed as well.

On Tuesday night, the team and support staff enjoyed a special dinner together at Texas de Brazil steakhouse in South Beach where players feasted on all-you-can-eat servings of sixteen cuts of meat, sushi, salmon, various soups and salads and desserts. Prior to the team’s outing, Coach Swinney joked that offensive lineman “Kalon Davis and David Beasley could probably eat a small car, so I’m sure they’ll have fun tonight.”

With Friday night’s Orange Bowl being widely billed as a clash of high-octane spread offenses led by star quarterbacks Tajh Boyd and Braxton Miller, Brent Venables was quick to admit he took exception to that narrative.

“I don’t like that one bit,” Clemson’s defensive coordinator said at a news conference Tuesday morning. “I’d be lying to say I was. It doesn’t matter if it’s Ohio State or the Pittsburgh Steelers, your job on defense is to stop people. So when everybody wants to say it’s a shootout, you take offense to that.”

Still, it’s not exactly an unfair expectation with the way both offenses have lit up the scoreboard this season.

The Buckeyes have rolled up better than 46 points and 518 yards per game behind a pair of 1,000-yard rushers in bruising 235-pound tailback Carlos Hyde and electric dual-threat quarterback Braxton Miller.

“We know that if we don’t do things right, if we give up big plays, if we don’t stop the run, if we don’t have somebody in the A gap when we need to, then they’ll break the scoreboard,” Venables said.

Venables was joined at the podium Tuesday by two of the leaders of his unit, senior linebacker Spencer Shuey and junior lineman Grady Jarrett.

Many of the questions dealt with how the Tigers planned to stop the talented Miller, who threw for 22 touchdowns this season in addition to rushing for 10.

“It’s going to be a challenge, but for me it all starts in the trenches, so we have to win the line of scrimmage,” Jarrett said. “Both Miller and Hyde are good runners, but I feel like (Miller) is undervalued as a passer, as well. So we’re preparing for it all.”

Shuey had a busy schedule ahead Tuesday between the morning news conference, practice in the afternoon and a team dinner outing to Texas de Brazil steakhouse in Miami Beach in the evening. He was also celebrating his 23rd birthday.

“I don’t think anybody would be upset having their birthday in Miami and staying at the hotel that we are,” he said. “I’m definitely blessed to have the opportunity.”

After the news conference, Shuey sat down with individual reporters for interviews and was asked whether he’d buy a ticket, if he weren’t playing, to watch Boyd and Miller battle it out.

Shuey had a similar outlook on the narrative of a looming shootout as Venables did.

“I definitely agree 100 percent with how Coach Venables responded to that,” Shuey said. “We don’t take lightly to people thinking it’s going to be a high-scoring game because that’s our job — to prevent people scoring and try to keep it as low as possible. We’re not trying to get one more stop than them or competing against their defense. We want to hold them to the least points possible and give our offense a chance to win.”

Much has been made of the Tigers’ defensive improvement this season, as they lead the nation in tackles for loss (112) and are tied for 17th in scoring defense (21.1 points per game) and 23rd in total defense (350.8 yards).

“That was a great moment for our defense and our program, and it definitely gave us a lot of momentum going into the offseason,” Shuey said. “I think the defense really started to grasp that we can be a major factor in helping our team win.

“We understood what it takes preparation-wise for a bowl game, having a little extra time and being able to lock in and understand the physicality of practice and be able to take it out in the game. For me, this is my last game as a Clemson Tiger and it’s definitely going to be exciting.”

VIDEO: Behind the Scenes with Clemson Video Services

Members of the Tigers defense spoke to the media this morning about their match-up against Ohio State, how to stop Buckeye quarterback Braxton Miller and what they need to do to slow down the Buckeyes attack: