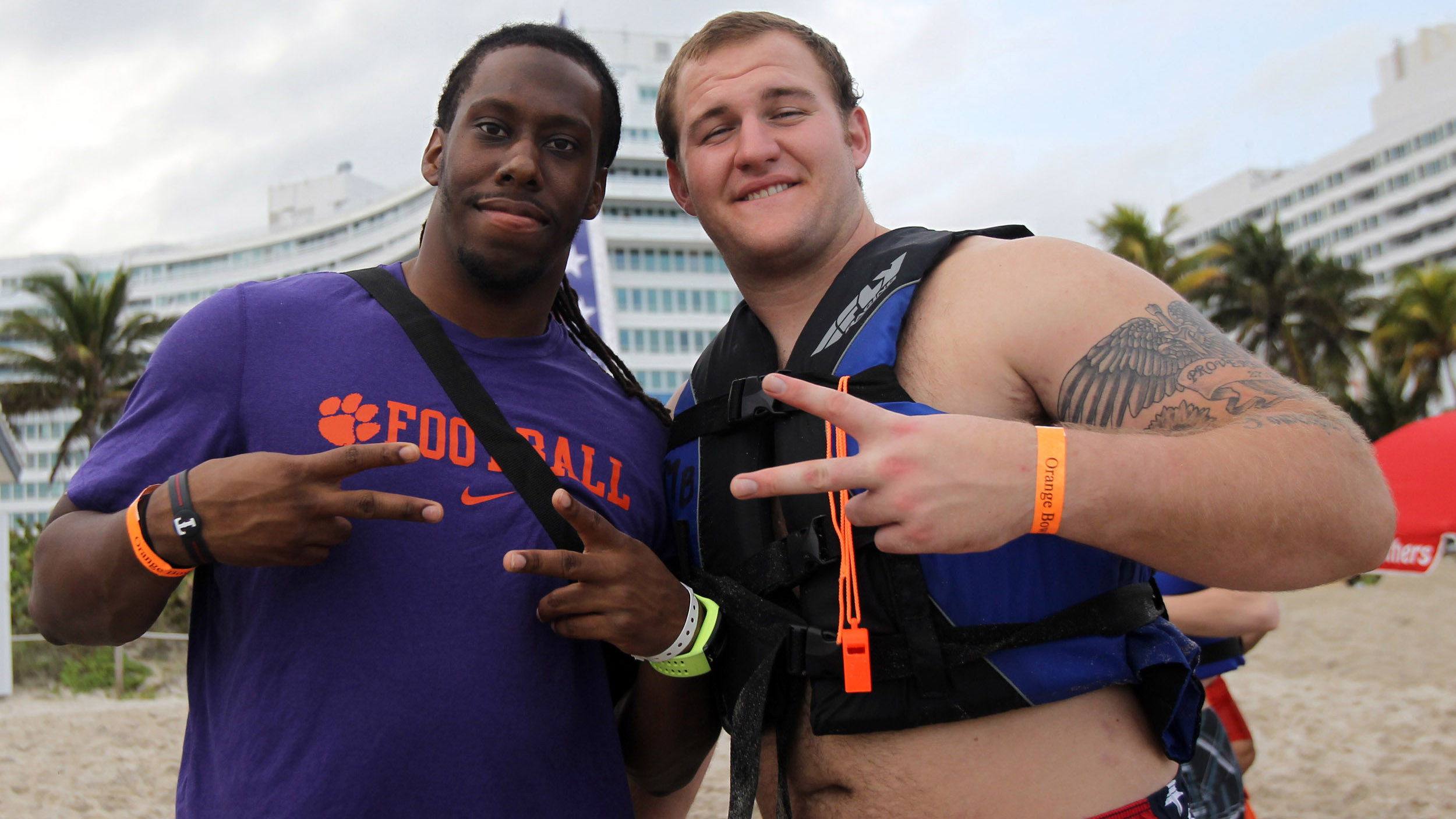 Day at the Beach: Tigers’ Bowl Prep Heating Up in South Florida

MIAMI BEACH, FL – Clemson’s football team practiced for the first time in Miami on Monday afternoon ahead of the Orange Bowl, and it was no day at the beach.

Once practice ended around 2 p.m. on the campus of Barry University in downtown Miami, the team boarded busses and headed back to the posh Fontainebleau Hotel in Miami Beach for a team outing on its gorgeous beachfront.

The players, coaches, staffers and families rode Jet Skis, played volleyball, posed for pictures with Obie — the Orange Bowl’s mascot — and admired an intricate sand sculpture featuring the bowl logo, a Tiger paw and a replica of Howard’s Rock that two beachgoers had been working on since 8 a.m. to have ready for the event.

A little fun in the sun was well earned for the Tigers after a two-hour practice in the heat and humidity of south Florida.

I caught up with junior wide receiver Adam Humphries after practice was over and asked him about the heat and how it might affect the team.

“It’s crazy stepping off the plane and feeling the humidity down here,” Humphries said. “Just coming from Clemson where we’re practicing in sweat pants and long sleeves, and to come here, I’m drenched in sweat, about to hop in the ice tub. It’s a huge transition, but for the wide receiver group, our muscles are looser and we can run well. And a lot of the guys on our team are from Florida, so I think overall it will play in our favor.”

Humphries also said the team was expecting Friday’s clash with sixth-ranked Ohio State to be a “four-quarter game,” much like last year’s thrilling 25-24 win over then-No. 7 LSU in the Chick-fil-A Bowl, and that conditioning would be a big factor.

Swinney is nothing if not a man with talent for coming up with clever catchphrases, and when I asked him if the heat might play a factor in Friday’s game, he had one at the ready.

“Mo’ hotter, mo’ better,” he said. “I love it. I’m going to have a T-shirt made up. This is my kind of weather right here. I was messing with our guys earlier, with (offensive linemen) Kalon Davis and David Beasley, busting on those big old boys and telling them, ‘Man, I know you guys just love this heat and this humidity.’

“But it’s a mindset, it really is. We’re fortunate that we are in the South, so our guys understand what hot humidity is. It’s cold back home right now, but it hasn’t been that long away that we had to deal with the heat. It’s something that both teams have to deal with, and that’s where your depth comes in and your conditioning.”

After feeling like they wore down a bit in the second half of the 2012 Orange Bowl against West Virginia, Humphries said Swinney had geared the team’s preparation this year toward making sure the players weren’t drained come game day.

“Coach Swinney has done a great job of managing our practices,” Humphries said. “He was saying that a few years ago in his notes he wrote down that he may have overworked us a little bit. And this year, I think we’ve done a perfect mixture of hard-working practices and some light practices. So I think we’re all fresh and we’re getting adjusted to the weather.”

Swinney said he was pleased with Monday’s practice, which was a “Tuesday-type” practice for the team, meaning it was organized to be the same practice that they would normally have four days before any regular-season contest — the Tuesday before a Saturday game.

“Obviously we’re a lot further ahead than we would normally be on a typical Tuesday, but this week is about details,” he said. “This week is about really knowing what to do — the what, the why, the when — so that you can go play well.

“Because that’s what it’s going to take when you’ve got two teams with this amount of time to get a plan down. The execution part of it is what this week’s about, and I like where the guys were today. We’ve got to clean some things up tomorrow, but their mentality and their focus on practice was very, very good.”

Clearly one of the focuses of practice this week, as it always is, is taking care of the football. The Tigers turned the ball over just 12 times in their 10 victories (1.2 per game) this season, but committed 10 turnovers in their two losses (5 per game).

Swinney cited the team’s last visit to the Orange Bowl, when they turned it over four times, as a prime example of what can happen when you don’t protect the ball.

“It’s impossible to spend more time on taking care of the ball than what we do, as a whole,” Swinney said. “Obviously that last one, it got away from us in that regard, but that’s the thing with us — when we take care of the ball, we usually win. … But that’s obviously a huge focus for us. We talk about managing the game, and you’ve got to manage it in practice, as well. That’s a mentality that we try to prepare in practice for all the time, but we win a lot of games when we win that turnover margin, so we all know how important that is.”

Clemson managed to buck that trend in last year’s bowl game by winning despite losing the turnover battle 2-1, but that required the defense to force eight three-and-outs — more than any LSU foe all season — along with some fourth-quarter heroics from Tajh Boyd, DeAndre Hopkins and Chandler Catanzaro, among others.

If Clemson can defeat the Buckeyes, it would be the only program in the country to defeat a team in the top 10 of the BCS standings in a bowl game in 2012 and 2013.

And that, according to Humphries, would mean everything in terms of momentum.

“Last year after the LSU win, it just changed the outlook of our whole season,” Humphries said, “and going into offseason training it’s a huge motivational tool for our guys to say, ‘We defeated LSU, we’ve got a big season ahead of us.’ I think that win, if we win this week, would be nothing compared to this. It would be huge for our program and for our team.”

First practice in the books. Beautiful day–plenty of team activities planned for this afternoon: pic.twitter.com/F16bofppZM

This morning while the rest of the team was at the FCA Prayer Breakfast across town, select players from the offense participated in media sessions in Fort Lauderdale. Rod McDowell, Sammy Watkins, Tyler Shatley, Brandon Thomas and Tajh Boyd discussed the upcoming match-up vs. Ohio State:

Rest of the team is at the FCA Prayer Breakfast this morning–all wearing their brand new white travel suits: pic.twitter.com/u3AhenZEnq