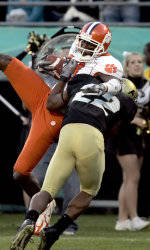 ORLANDO, Fla. (AP) – James Davis ran for 150 yards and a touchdown, Charlie Whitehurst scrambled for a score and No. 23 Clemson beat Colorado 19-10 in the Champs Sports Bowl on Tuesday, handing the Buffaloes their fourth consecutive loss.

Davis’ 6-yard TD run with 1:38 remaining sealed a fourth straight victory for Clemson (8-4) and capped a disappointing season for Colorado (7-6).

The Buffs made it close, though, something they didn’t do in their previous two games – losses to Nebraska and Texas by a combined score of 100-6.

Backup quarterback Brian White replaced starter James Cox midway through the fourth quarter and led Colorado on a 69-yard scoring drive that made it 13-10. His 2-yard TD pass to Quinn Sypniewski ended a streak of 14 quarters without a touchdown and gave the Buffs a chance.

White rolled right on third down, then threw left to Sypniewski, who was wide open in the end zone.

But Davis and Whitehurst answered, moving the Tigers 61 yards in 4:07 to put the game away.

Davis and Whitehurst made big plays all game.

Davis ran 28 times and eclipsed 100 yards for the fourth time this season – a school record for a freshman. He also was named the game’s most valuable player.

Whitehurst, a senior expected to be a first-day selection in next year’s NFL draft, was equally efficient and effective. He was 19-of-27 for 196 yards and an interception. He showed no signs of shoulder problems after having arthroscopic surgery early this month to relieve pain that had bothered him since September.

He didn’t get much help from leading receiver Chansi Stuckey, who entered the game with 62 catches for 761 yards and four touchdowns. Stuckey sustained a concussion in the first half and did not return. He ran twice – both passes behind the line of scrimmage – for nine yards.

Whitehurst came up big on all of Clemson’s scoring drives.

He completed a 24-yard pass to Curtis Baham on third down that set up Jad Dean’s first field goal, a 26-yarder than gave the Tigers a 3-0 lead in the first quarter. Whitehurst was 3-for-3 passing on third down on a drive in the second that set up Dean’s 18-yarder.

After Davis’ 40-yard run on the second play of the third quarter – his longest this year, a bowl record and the longest allowed by the Buffs this season – Whitehurst completed an 11-yard pass on third down to set up first and goal. Two plays later, he scrambled around the right end for a 5-yard touchdown.

He slipped out of Akarika Dawn’s grasp at the 5 and strolled in for the score, which made it 13-3.

Dawn dropped his head to the ground and pounded the grass with his right fist in frustration. It was that kind of night for Colorado.

It also was that kind of season.

The Buffaloes were 7-2 at one point, losing only to Miami and Texas, and there was talk about a contract extension for embattled coach Gary Barnett. But consecutive losses to Iowa State, Nebraska and Texas ended that thought as well as Barnett’s tenure in Boulder.

Barnett had survived a sordid recruiting scandal and a suspension following derogatory remarks about a female kicker who claimed she was raped by a teammate in 2000. But the losses – most notably the 70-3 drubbing against the Longhorns in the Big 12 title game – ultimately led to his forced resignation nearly three weeks ago.

There was little Hankwitz could do to help the offense.

Cox made his second career start, replacing Joel Klatt after the senior starter sustained a severe concussion in the conference title game. Klatt, who hospitalized overnight after the injury, didn’t even dress for the game.

Cox, who made his first start in 2004 against Iowa State, showed his inexperience. He misfired often, overthrowing and underthrowing receivers and making poor decisions with the ball.