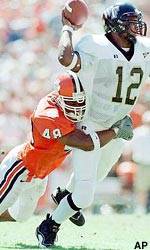 Probable-starting CB Kevin Johnson with a bruised shoulder. If he can’t go, freshman Ryan Hemby will start in his place.

Lineup News: Rodney Thomas will start in place of Braxton K. Williams at the strongside linebacker Akil Smith will start at left tackle in place of Derrick Brantley. Both changes are coaches decision and not related to injury.

Color and Pageantry: Former Clemson golf All-American John Engler will receive the Dr. R.C. Edwards Sportsmanship Award prior to Saturday’s game. It is a department wide annual award that will be presented to Engler for his sportsmanship demonstrated during the 2001-02 academic year. Clemson’s ACC Championship men’s indoor and outdoor track teams will also be honored during pregame activities.

Other Notes: Clemson center Kyle Young was named to the preseason lists for the Dave Rimington and Outland Trophy this week. The Rimington Award goes to the top center in the nation, while the Outland goes to the top interior lineman, offensive or defensive. Earlier, Young was named to the preseason list for the Lombardi Award.