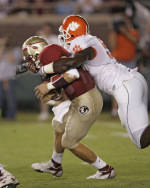 Clemson vs. Wake Forest Series Clemson owns 54 wins over Wake Forest in history, its second highest victory total over any opponent. Clemson has 62 wins over South Carolina. Forty-three of those wins against Wake Forest have taken place since the ACC was formed in 1953. Wake Forest has won two of the last three meetings with both contests taking place in Winston-Salem. The Deacs won 45-17 in 2003 against a Clemson team that finished the year 9-4 and ranked in the top 25 in the nation. Last year, Wake Forest defeated Clemson 31-27. Clemson finished last season in the top 25 as well with an 8-4 record. Clemson has a 43-8-1 edge in the series since 1953. Clemson has played Wake Forest in football 52 consecutive years, as the last year the two schools did not play was 1952. The two schools are in the same division, so they will continue to play annually. Clemson leads the series 54-16-1 overall, including a 31-7 record in games played at Clemson and a 27-7 mark in games played in Death Valley. Clemson did not lose at home to Wake Forest between 1962-92. Wake Forest broke the streak in 1993 when Jim Caldwell’s first team defeated Clemson 20-16 at Death Valley. Clemson went on to finish that season 9-3. Clemson has a 17-9-1 lead in the series in games played at Wake Forest, including 10-5-1 in games played at Groves Stadium. Wake Forest has won the last two games played in Winston-Salem and averaged 38 points per game in the process. Only one coach in history won as many as four games against Clemson without a loss in Death Valley and the coach was from Wake Forest. Frank Howard and Peahead Walker had a close friendship, but Peahead had a 4-0 record against Howard in Death Valley. Clemson has won nine out of 12 against Wake Forest dating to 1994. The Demon Deacons won back-to-back games in 1992-93, the only time Wake Forest has won consecutive contests against Clemson since 1946-47. Clemson lost at Wake Forest 45-17 the last time the Tigers went to Winston-Salem. Clemson had 29 first downs and 405 yards of total offense, but lost by 28 points. Clemson has a 5-2 record against Wake Forest under Tommy Bowden, but four of the five Clemson wins have been close. The Tigers won 12-3 in 1999, 21-14 in 2001, 31-23 in 2002 and 37-30 in double overtime in 2004. Clemson’s only blowout against Wake Forest took place in 2000 when Clemson won by a 55-9 score. The two teams have played at three neutral sites in history, including Tokyo, Japan. Clemson won that game in 1982 by a 21-17 score to close out an ACC Championship season. Clemson defeated a Wake Forest team coached by current Virginia coach Al Groh on Halloween Day 1981 by an 82-24 score. That is the highest scoring game in ACC history involving two league teams. Clemson was 12-12 on third down in that game, a school record. The Tigers went on to win the national championship.

Wake Forest scored 10 fourth-quarter points, including a touchdown with 33 seconds remaining, to defeat Clemson 31-27. Following the Demon Deacon touchdown, the Tigers moved the ball 77 yards in four plays, but wide receiver Curtis Baham was stopped at the three-yard line as time expired.

After three Reggie Merriweather runs gained 19 yards to start the game, Charlie Whitehurst’s first pass attempt was deflected into the air, and Jon Abbate intercepted. The Demon Deacons needed only six plays to move 37 yards, and Cory Randolph capped the drive with a four-yard touchdown run.

The Tigers answered on their next possession with a 15-play, 80-yard drive that culminated with a one-yard touchdown run by James Davis, his first score as a Tiger. The drive took 7:15 off the clock.

It took the Demon Deacons only three plays to regain the lead. On a third down from the Wake Forest 26, Randolph dropped back and found Kenneth Moore wide open along the Demon Deacon sideline, and he raced untouched into the endzone.

Abbate again picked off a Whitehurst pass that was deflected into the air on the first play of the ensuing drive, giving the Demon Deacons the ball deep in Tiger territory. However, the Tiger defense did not allow a first down, and Sam Swank missed wide right on a 40-yard field goal attempt.

Clemson was able to move the ball into Wake Forest territory to begin the second quarter, but an intentional grounding call helped bring the drive to a halt. Cole Chason punt was blocked and Wake Forest began a drive in Clemson territory for the third time in the first half.

On a third-and-15 play, Randolph rolled left and found Nate Morton all alone behind the Tiger secondary for a 34-yard touchdown and a 21-7 lead.

The next Clemson drive ended with a punt, and the Demon Deacons moved the ball into Tiger territory before the defense made a play that shifted the momentum. Gaines Adams busted through the line and forced a fumble by Randolph that was recovered by Tramaine Billie.

Whitehurst hit Kelvin Grant for a 21-yard gain to put Clemson in scoring position, and Merriweather then scored on a 14-yard run. After a three-and-out by the Wake Forest offense, the Tigers went on the offensive again.

Another big pass play helped move the Tigers deep into Deacon territory, as Whitehurst hit Baham over the middle for 37 yards. On third down from the Wake Forest 11, Davis ran left and dove over the pylon in the end zone for a touchdown. The teams went into halftime with the score tied 21-21.

Clemson opened the second half much like the way it ended the first. Wake Forest received the second-half kickoff, but lost nine yards in three plays.

The Tigers followed with a 10-play, 45-yard drive, but could not get closer than the Demon Deacon two-yard line. Jad Dean hit a 21-yard field goal to give Clemson its first lead of the day.

Clemson again forced a three-and-out and began its next drive at its own 29. Whitehurst hit Baham for 18 yards over the middle and into Wake Forest territory, and Davis had two runs that produced a first down. A holding call made the drive stall, but Dean continued his hot kicking with a 47-yarder to give the Tigers a six-point lead.

With under three minutes left, Wake Forest began a six-play drive that ended with a six-yard touchdown pass from Randolph to Kevin Marion.

Clemson got the ball back at its 20-yard line with 33 seconds left. Whitehurst hit Chansi Stuckey for 30 yards on first down, with Stuckey making a spectacular one-handed grab. Two passes to Davis gained 20 yards, and with eight seconds left, Whitehurst found Baham over the middle, but the Tiger receiver was tackled by four Wake Forest defenders at the three-yard line just as time expired. It was the third consecutive loss for the Tigers that was decided on the final play of the game.

Clemson out-gained Wake Forest 454-355 and out-rushed the Demon Deacons 150-133 despite them leading the ACC in rushing entering the game.

Whitehurst connected on 28 of 42 passes for 304 yards, his first 300-yard passing game since 2003. Merriweather led the Tigers in rushing with 92 yards on 17 carries. Stuckey caught seven passes for 74 yards, and Baham’s three receptions were good for 82 yards.

Tye Hill made 11 tackles, including three tackles for loss, and Waters registered another double-digit tackle game with 10 stops.

Clemson used a last-minute drive, a two-point conversion, and two overtimes to defeat Wake Forest 37-30 in the 2004 season opener. Charlie Whitehurst’s found Kyle Browning for an 11-yard touchdown pass in the second overtime and the Tiger defense held Wake Forest on four downs to win a conference game on opening day for the first time since 1969.

Clemson got off to a quick start after a Whitehurst to Chansi Stuckey blocked a Ryan Plackemeier punt through the endzone for a safety and Stephen Furr booted a 42-yard field goal (his first career made field goal) off the left upright for a 19-3 Clemson lead.

Wake Forest came storming back, as backup quarterback Ben Mauk found Jason Anderson for an 85-yard touchdown pass, which tied for the longest pass in the history of Death Valley by an opponent. Wake Forest scored later in the quarter when Cornelius Birgs scored from two yards out.

The Wake Forest defense forced Clemson into a three-and-out on its next possession and needed only three plays to find the endzone. Chris Barclay, who rushed for 179 yards on 29 carries, broke free from the pile on a third-and-two play and dashed 50 yards for a touchdown. After trailing 19-3, the Demon Deacons reeled off 24 unanswered points.

Whitehurst hit Stuckey on each of the first two plays of the game’s most important drive to move the ball into Demon Deacon territory. The Tigers would end up taking eight snaps inside the Wake Forest 10-yard line before Kelvin Grant in the corner of the endzone, and the sophomore receiver out-jumped the Wake Forest defender to pull down the two-pointer.

Clemson won the overtime coin toss and elected to play defense first. Wake Forest could not pick up a first down, and Wisnosky booted his third field goal of the day, this time a 38-yarder. Furr connected from 23 yards out to send the game to a second overtime period, a first in Clemson history.

The Tigers got the ball first in the second overtime. After picking up a first down, Whitehurst dropped back and lofted a screen pass to Browning, and he raced untouched into the endzone. One Barclay run and three incomplete Cory Randolph passes gave Clemson its fourth overtime win in its history.

Currie and Stuckey became just the third tandem in Tiger history to amass at least 100 receiving yards in the same game. Anthony Waters and Miller led the Tigers with nine tackles apiece. Miller also was named ACC Defensive Back-of-the-Week for his performance.

Wake Forest enters Saturday’s game with a 5-0 record, its first 5-0 start since 1987. Clemson is 4-1, its best five-game start since 2001, but the Demon Deacons have the better record entering the contest. This is the first time since 2002 that Wake Forest has had the better record entering the game with Clemson. Clemson won that contest at Death Valley 31-23. That was also the case in the 1999 game, when Clemson won, 12-3. Thus Tommy Bowden is 2-0 against the Demon Deacons when Wake Forest enters the contest with the better overall record.

This is the 14th time since 1950 that Wake Forest has entered the game with Clemson with the better record. The Tigers have an 11-2 record in those games. The two losses took place in 1993 and 1998, both at Clemson.

Clemson has a 5-2 record against Wake Forest under Tommy Bowden and a 3-2 record against the Demon Deacons since Jim Grobe has been the head coach. But, the Demon Deacons have been productive against the Tigers. In the fivegames Jim Grobe has coached against Clemson the Tigers his Demon Deacons have gained 1294 yards rushing, an average of 258.8 yards per game. They have picked up 407.4 yards of total offense per contest. Wake Forest has averaged 28.6 points per game against Clemson the last five years.