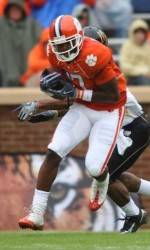  Clemson won last year 38-3 at Clemson, but Wake Forest won the last time the two teams met at Wake Forest. That was a 12-7 victory for Wake Forest in Tommy Bowden’s last game as Clemson head coach. That is also the last time Clemson failed to score at least 10 points in a game. The Tigers have a 31-game streak under Dabo Swinney, the longest streak for the Clemson program since a 34-game streak between 1982-85.

 This will be Dabo Swinney’s second game as Clemson head coach against Wake Forest. He won last year, 38-3 in what might be Clemson’s best all-around performance of the year. The Tigers were 3-3 against Wake Forest in the previous six games prior to him taking over the Clemson program.

 Clemson won the 2006 game at Wake Forest, 27-17. That was the last time Clemson won at Winston-Salem. The late Gaines Adams had a game changing 66-yard fumble return on a botched field goal attempt in the fourth quarter to cut the Demon Deacons lead to 17-10. The Tigers scored 24 points in the fourth period to gain the victory. C.J. Spiller had a 72-yard run in that game.

 Clemson played at Wake Forest three times in a four-year period from 2003-06. Clemson was 1-2 at Wake Forest during that time. The Deacs won 45-17 in 2003 against a Clemson team that finished the year 9-4 and ranked in the top 25 in the nation. Clemson won four in a row after that game and Wake Forest lost its last three games. Wake Forest also won in 2005 at Winston-Salem.

 Clemson has a 47-9-1 edge in the series since 1953, a .832 winning percentage. Clemson has played Wake Forest in football 57 consecutive years, as the last year the two schools did not play was 1952. The two schools are in the same division, so they will continue to play annually.

 Only one coach in history won as many as four games against Clemson without a loss in Death Valley and the coach was from Wake Forest. Frank Howard and Peahead Walker had a close friendship, but Peahead had a 4-0 record against Howard in Death Valley.

 Clemson had a 7-3 record against Wake Forest under Tommy Bowden, but five of the seven Clemson wins were decided by 10 points or less.

 The two teams have played at three neutral sites games over the years, including Tokyo, Japan. Clemson won that game in 1982 by a 21-17 score to close out an ACC Championship season.

 Clemson defeated a Wake Forest team coached by current Georgia Tech defensive coordinator Al Groh on Halloween Day 1981 by an 82-24 score. That is the highest scoring game in ACC history involving two league teams. Clemson was 12-12 on third down in that game, a school record. The Tigers went on to win the national championship that season.

It was Clemson’s largest victory margin over an ACC team since a 47-10 win over Duke at Durham in 2007 and the largest victory margin over an ACC team in Death Valley since a 52-7 win over North Carolina in 2006. It was Clemson’s largest margin of victory over Wake Forest since 2000 and the Tigers continued their success against Wake Forest in games played at Clemson. The Demon Deacons have not won at Clemson since 1998 and have just two wins in Death Valley since 1961.

Spiller had nine carries for 106 yards and two scores, one a 66-yard run in the second period, and the other a 14-yard run in the third period. Spiller went over 6,000 all-purpose running yards and 2,800 rushing yards during the game. He became the first ACC player in history with over 6,000 all-purpose yards. His 66-yard scoring run gave him at least one play of 60 yards or more in every game this year, five of which have gone for touchdowns.

Michael Palmer was Parker’s favorite with four receptions for 49 yards and a touchdown.

Jacoby Ford had just one catch, but it went for 51 yards and set up a score. Clemson had five red-zone scoring opportunities and had four touchdowns and a field goal. Clemson had scored touchdowns in the red-zone just three times in the first five games.

Clemson’s defense was outstanding, holding Wake Forest to just 178 total yards, including just 81 yards rushing on 44 attempts. Skinner, who entered the game as the ACC’s top passer, was 11-24 for 82 yards and two interceptions. He was also sacked five times by Clemson’s defense. Kavell Conner was Clemson’s top tackler with eight, while reserve linebacker Tig Willard had seven.

DeAndre McDaniel had five stops and a 26-yard interception return that set up a field goal. DaQuan Bowers had a career high tying three tackles for loss. The Clemson defense had 12 tackles for loss as a team, the top total this season.