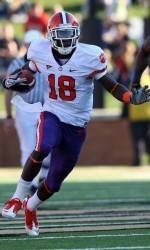 Clemson vs. Wake Forest Series  Clemson owns 58 wins over Wake Forest in history, its second highest victory total over any opponent. Clemson has 65 wins over South Carolina. Forty-eight of those wins against Wake Forest have taken place since the ACC was formed in 1953. Clemson is 34-7 against Wake Forest in games played in Clemson and is 29-7 in Death Valley in the series that dates to a13-0 Clemson win in Charlotte in 1933.  Clemson won last year 30-10 at Wake Forest and 38-3 the previous year (2009) at Clemson. Wake Forest’s last win was by a 12-7 margin in 2008 in Tommy Bowden’s last game as Clemson head coach.  Wake Forest Coach Jim Grobe has a 3-7 record against Clemson in his 10 previous years at Wake Forest. All three of the wins have taken place at Wake Forest. He is 0-4 in Death Valley and Wake Forest has not won at Clemson since 1998 when Jim Caldwell (now with the Indianapolis Colts) coached the Demon Deacons to a 29-19 win. Wake Forest has won just twice at Clemson since 1962 and Caldwell won both games. He also defeated Clemson in 1993, Ken Hatfield’s last year as Clemson coach.  This will be Dabo Swinney’s third game as Clemson head coach against Wake Forest. He is 2-0 as a head coach, but the Tigers were 3-3 against Wake Forest in the previous six games when he was an assistant.  Clemson won the 2006 game at Wake Forest, 27-17. The late Gaines Adams had a game changing 66-yard fumble return on a botched field goal attempt in the fourth quarter to cut the Demon Deacons lead to 17-10. The Tigers scored 24 points in the fourth period to gain the victory. C.J. Spiller had a 72-yard run in that game. Wake Forest went on to win the ACC Championship that year.  Clemson played at Wake Forest three times in a four-year period from 2003-06. Clemson was 1-2 at Wake Forest during that time. The Deacs won 45-17 in 2003 against a Clemson team that finished the year 9-4 and ranked in the top 25 in the nation. Clemson won four in a row after that game and Wake Forest lost its last three games. Wake Forest also won in 2005 at Winston-Salem.  Clemson has a 48-9-1 edge in the series since 1953 or since the formation of the ACC, a .836 winning percentage. Clemson has played Wake Forest in football 58 consecutive years, as the last year the two schools did not play was 1952. The two schools are in the same division, so they will continue to play annually.  Clemson has a 21-10-1 lead in the series in games played at Wake Forest, including 13-6-1 in games played at Groves Stadium.  Only one coach in history won as many as four games against Clemson without a loss in Death Valley and the coach was from Wake Forest. Frank Howard and Peahead Walker had a close friendship, but Peahead had a 4-0 record against Howard in Death Valley.  Walker fielded some tough teams, but lost five in a row to the Tigers (1937-41), including his first two outings against Frank Howard, 39-0 and 29-0, after Neely’s departure to Rice in 1940.  Peahead’s response was to win six in a row against Howard (1942-47), knocking #16-ranked Clemson out of a likely AP “top 20” finish in 1945 with a season-ending 13-6 victory. Even if Peahead conceded that three of his wins (1942-44) were during Howard’s depleted “war years,” he still held a 3-2 edge over his soon-to-be comedic partner on the gridiron speaking circuit.  In the final three years of the Howard-Walker rivalry (1948-50), both the Tigers and Deacons were at their strongest. In going undefeated in both 1948 and 1950, Clemson faced only one “top 20” team in regular season play each year: Peahead’s #19 Wake Forest in 1948 and his #17 Deacs in 1950, both on the road. Howard’s 21-14 and 13-12 wins, respectively enabled his Tigers to finish #11 and #10 in the nation; Peahead’s 1948 Deacons settled for a #20 national ranking.  At Clemson in 1949, Wake decisively defeated the home team, 35-21, which means the Howard-Peahead rivalry ended in a 4-4 tie if one disregards the “war years.” Howard was 16-1-1 against the Deacons after Peahead’s departure (1951-69).  Clemson had a 7-3 record against Wake Forest under Tommy Bowden’s, but five of the seven Clemson wins were decided by 10 points or less.  The two teams have played at three neutral sites games over the years, including Tokyo, Japan. Clemson won that game in 1982 by a 21-17 score to close out an ACC Championship season.  Clemson defeated a Wake Forest team coached by current Georgia Tech defensive coordinator Al Groh on Halloween Day 1981 by an 82-24 score. That is the highest scoring game in ACC history involving two league teams. Clemson was 12-12 on third down in that game, a school record. The Tigers went on to win the national championship that season.

Kyle Parker was 15-17 passing for 194 yards and two touchdowns to lead Clemson to a 30-10 win over Wake Forest at BB&T Field on November 20. It was the Tigers’ largest victory margin at Wake Forest since 1978 and made Clemson bowl eligible for the 12th year in a row.

Field goals of 43 yards and 22 yards by Chandler Catanzaro put Clemson up by a score of 6-0. Then with 46 seconds remaining in the second quarter, Parker connected with Jaron Brown for a 40-yard touchdown pass to give the Tigers a 13-0 halftime lead.

The Tigers built a 20-0 lead in the third quarter when DeAndre Hopkins caught a two-yard touchdown pass from Parker. Through three quarters, the Tiger defense allowed no points and only 97 yards.

In the fourth quarter, Catanzaro, who was 3-3 on field-goal attempts in the game, made a 32-yard field goal. After a 45-yard field goal by Jimmy Newman put Wake Forest on the scoreboard, Jamie Harper rushed 63 yards on the next snap to give Clemson a 30-3 lead.

Wake Forest mustered an 11-play, 79-yard drive, capped by Josh Harris’ one-yard touchdown run, to cut the Tiger lead to 30-10 with 6:02 left in the game. But Clemson held onto the ball for the rest of the game to close out the 20-point win. All 10 Demon Deacon points and a majority of their yards came in the fourth quarter against Clemson’s defense that predominately featured second and third-team players.