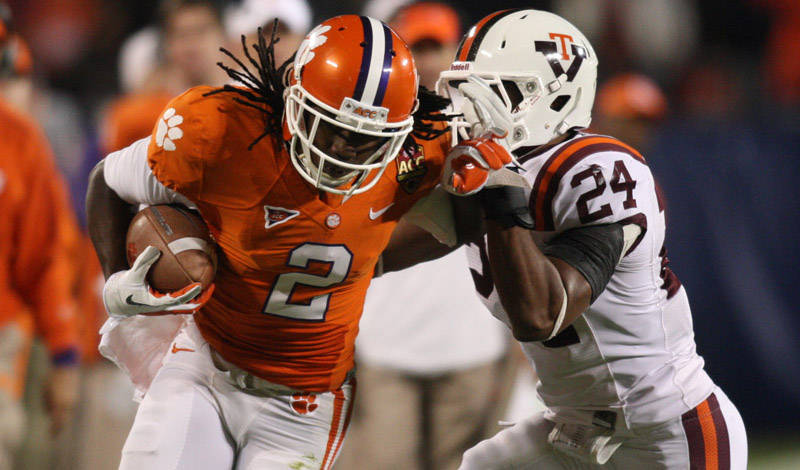 The Tigers then defeated Virginia Tech 38-10 in the ACC Championship game in Char­lotte last year. It marked the first time Clemson had beaten the same team twice in one year. So after not defeating Virginia Tech since 1989, the Tigers outscored the Hokies 61-13 in the two games in 2011.

Other Notes of Interest

Military Appreciation Day is Celebrated during the Clemson vs. Virginia Tech Game The Clemson University Athletic Department will recognize and honor our fallen soldiers, veterans, and current military personnel serving in our armed forces during pregame, in game, and halftime ceremonies on Saturday.

Clemson wide receiver Daniel Rodri­guez, an army veteran with a Purple Heart, will lead the team down the hill during Clemson’s player entrance carrying an American Flag.

Veterans and current soldiers can participate in a parade to the stadium through the Clemson campus. The parade lineup is at 10:45 AM out­side of Holmes and McCabe dormitories on Fort Hill Street. The parade will begin at 11:00 AM and will end at the tunnel of Littlejohn Coliseum.

The colors will be presented by the Clemson University Company C-4 Pershing Rifles. At the conclusion of the national anthem prior to kickoff, four F-15E fighter jets from the 335th Fighter Squadron of Seymour Johnson Air Force Base, NC will do a flyover of Memorial Stadium.

There will be a special presentation during pregame ceremonies to recognize Air Force Major Rudolf (Rudy) Anderson of Greenville, SC, who was killed when his U-2 plane was shot down 50 years ago this October 27 on a recon­naissance mission during the Cuban Missile Crisis. Maj. Anderson was the first recipient of the Air Force Cross and was a Clemson alum.

The South Carolina National Guard designed the coin used in the pregame coin toss. The commemorative coin honors all the soldiers killed in the wars in Afghanistan and Iraq.

All veterans and current soldiers from both schools are invited to participate in halftime cer­emonies by gathering in the West End Zone with five minutes remaining in the second quarter by using portals W and X.

Halftime ceremonies will feature the pa­rade of veterans and current soldiers onto the field. There will be a joint musical perfor­mance by the Virginia Tech band and Clemson bands. They will play “God Bless the USA,” the military hymns of the five service branches, and “Stars & Stripes Forever.”

Prior to the playing of TAPS, there will be a 21-gun salute from the “Scroll of Honor Memo­rial” (across the street from the stadium behind the East end zone) performed by a salute battery from Fort Jackson, SC.

Tiger fans have the opportunity to take part by purchasing this year’s Military Appreciation Day t-shirt. A portion of the proceeds from the sale of the shirt will go towards the Army and Air Force ROTC programs at Clemson University. The t-shirts are on sale for $15.95 at downtown Clemson clothing stores.