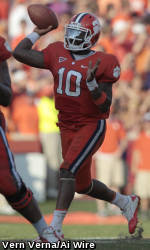 Clemson vs. Virginia Tech Series Clemson has a 17-12-1 lead in the series with Virginia Tech, but the Hokies have won five consecutive games, including the most recent in 2007 at Blacksburg when Frank Beamer’s team won 24-7 over a 10th ranked Clemson team.

The five wins in a row have spanned from 1998-2007 and have taken place in three different stadiums. Virginia Tech won at Clemson over Tommy West’s final team in 1998 by a 37-0 score, then won at Blacksburg the following year by a 31-11 score against Tommy Bowden’s first Clemson team. Virginia Tech then defeated Clemson 41-20 behind Michael Vick at the 2001 Gator Bowl. Tech then won in 2006 at Blacksburg and 2007 at Clemson.

Clemson’s last victory in the series took place in 1989 at Blacksburg, as a seventh-ranked Clemson team that had just won at Florida State, defeated Virginia Tech, 27-7. Virginia Tech’s only score came on a 90-yard kickoff return for a touchdown by Marcus Mickel.

Here are some other notes on the series:  The Clemson vs. Virginia Tech series is one of the oldest in the Clemson history books. The two teams first met in 1900 when the Tigers won 17-5 during John Heisman’s first year as head coach. That was Clemson’s fifth straight win in a 6-0 season in Heisman’s first year. That game was played in Charlotte, NC.  Clemson actually had a nine-game winning streak in the series from 1955-89, including a 6-1 record against the Hokies in the decade of the 1980s.  Clemson has a 6-3 advantage in the series in games played in Blacksburg, including a 4-2 lead in Lane Stadium.  Virginia Tech won the 1999 game in Blacksburg, a 31-11 Hokie victory in a Thursday night game on ESPN. Clemson trailed just 17-11 late in the game, but Virginia Tech scored two touchdowns in the last four minutes. Clemson held Michael Vick to 7-16 passing for 88 yards and intercepted three of his passes, the most effective pass defense against Vick during that season. That Virginia Tech team went on to play Florida State for the National Championship.  The 1956 Clemson vs. Virginia Tech game is the only other battle of top 15 teams in the history of the series. That game took place at Clemson and the Tigers won 21-6. That was the first ever battle of top 20 teams in the history of Death Valley.  Virginia Tech upset Clemson in the season opener at Clemson in 1986 by a 20-14 score behind coach Bill Dooley. That was one of just two season opening losses in Danny Ford’s Clemson career, and the Tigers lost just two games that season and went on to win the ACC. A blocked punt by Virginia Tech’s Mitch Dove was a key play in the game. Clemson’s punter that day was Bill Spiers, who went on to a 10-year major league baseball career.  Clemson won the 1985 game at Virginia Tech by a 20-17 score on a 36-yard field goal by David Treadwell on the last play of the game. That was the season opener for both teams.  Clemson had a three-game winning streak in the series between 1987-89. Clemson’s defense was prominent, allowing just 24 points and two offensive touchdowns in those three games combined. All three of those Clemson wins were against Frank Beamer, who came to Virginia Tech as head coach in 1987.  Beamer has a 2-1 record against Clemson in Memorial Stadium and is 5-3 against the Tigers overall. He is 2-2 against the Tigers in Lane Stadium.  This will be the fourth straight game Clemson has faced Virginia Tech as a top 25 team. Clemson was ranked 16th entering the Gator Bowl game in 2000, 10th entering the 2006 game at Blacksburg, 22nd entering the 2007 game in Clemson and 13th in AP and 15th in USA Today entering Saturday’s game at Blacksburg.

Boyd has led Clemson to all four wins as a starting quarterback and has completed 66 percent of his passes. He is 12th in the nation in passing efficiency and 10th in total offense. He has thrown for 1255 yards in just four games, the most passing yards by a Tiger in any four-game period in school history.

Branch is tied for the team lead in tackles with 23, including a team best tying 19 first hits. He has two tackles for loss and six quarterback pressures.