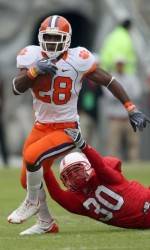  C.J. Spiller needs four touchdowns to tie the Clemson single season record. He has 14 and record is 18 by Travis Zachery in 2000.

 DeAndre McDaniel needs on interception to establish the Clemson season record for interceptions. He has eight and is the co-holder of the record at the moment.

 Jacoby Ford has caught at least one pass in 24 consecutive games he has played.

 Thomas Austin suffered an ankle injury at NC State and is questionable for the Virginia game. He has started 33 consecutive games in the offensive line.

Clemson vs. Virginia Series  Clemson holds a commanding 36-8-1 lead in the series with Virginia, but the Cavaliers hold an 8-7-1 advantage since 1990, or since Clemson won the first 29 games of the series. Virginia’s last win in the series took place in 2004 in Charlottesville by a 30-10 score on a Thursday night.

 This is the first meeting between the two teams at Clemson since the 2003 season when Clemson won in overtime 30-27 on a touchdown pass from Charlie Whitehurst to Kevin Youngblood.

 Clemson and Virginia will not meet again until 2013 when the two teams meet in Charlottesville. The Cavaliers won’t be back to Clemson until 2014.

 Clemson won the first 29 games of the series before Virginia cracked the win column with a 20-7 victory in Charlottesville in 1990. Ironically, Clemson’s first win in the history of the series (in 1955) was also by a 20-7 score. Clemson’s 29-game winning streak between 1955-89 is tied for the fourth longest winning streak in NCAA history for one team over another. The record is 43 in a row held by Notre Dame over Navy, a streak that ended in 2007.

 Virginia has gained its most success against Clemson when the game has been in September. Virginia has celebrated five of its eight wins over the Tigers in the month of September, including its last win in Death Valley in 2001, a game it won with just one second left. Virginia is 5-1 against Clemson in the month of September since 1990, but just 3-6-1 in October and November since that year.

 The only tie in the series took place in 1991, a 20-20 score at Clemson that was played on homecoming. The Tigers had 511 yards of total offense in that game and did not win, the only game in Clemson history in which Clemson picked up at least 500 yards, yet did not win the game.

 Clemson was 3-3 against Virginia under Tommy Bowden. Bowden picked up his first win as a Clemson head coach in 1999 against George Welsh and the Cavaliers, 33-14 in a game at Clemson. Clemson led that game 33-0, 35 minutes into the game. In 2000, Woody Dantzler led the Tigers to victory with a dazzling performance. Dantzler rushed for 220 yards and passed for 154 leading Clemson to a 31-10 victory. That is still the ACC record for rushing yardage in a game by a quarterback.