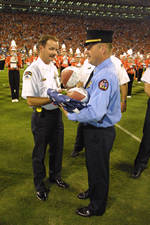 The coin toss for the Clemson vs. Texas A&M game on Saturday will be performed live from Baghdad. The coin toss is expected just after 8:00 PM eastern time, which will be just after 4:00 AM on September 4 in Baghdad.

This is believed to be the first time a live coin toss from Iraq has taken place for a college football game. United States military personal who are supporters of either Clemson or Texas A&M will be in attendance for the coin toss, which will be shown on ABC and in the stadium over Clemson’s new video board.

The live coin toss from Baghdad has been coordinated by Captain Bill Parker, a former Clemson professor of Military Science, who is now stationed in Iraq.

The event is all part of Military Appreciation Day, which will be celebrated at Saturday night’s game. Each year Clemson honors its military heritage at a football game. Clemson University was a military school until 1955. Texas A&M and Clemson ranked one-two nationally in alumni who served as officers in the United States Army in World War II.