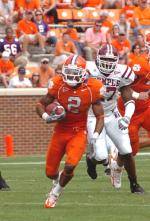 Temple has announced that its game against Clemson will be played in Charlotte, NC at Bank of America Stadium, home of the NFL’s Carolina Panthers, on Thursday evening, October 12. The exact kickoff time will be announced at a later date. The announcement was made Tuesday in conjunction with the release of the entire Mid-American Conference schedule.

“Both administrations have been in contact concerning the site of this game, and I have discussed it with Temple Head Coach Al Golden,” said Clemson Head Coach Tommy Bowden. “Both of us are in favor of the move.

“From our standpoint, It gives our fans, especially those in the Charlotte area, a chance to see us in an outstanding NFL facility. This is another testimony to our great fan support,” said Bowden.

Ticket prices for the Temple vs. Clemson game will be announced at a later date.

* Game to be played in Charlotte, NCAll Times TBAHome Games in BoldNote: Spring Game at Death Valley, April 8, 1:00 PMNote:  October 26 game at Virginia Tech is a Thursday night game that will be televised by ESPN.