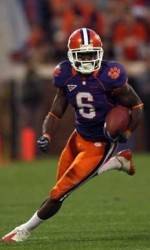  C.J. Spiller needs three touchdowns to tie the Clemson single season record. He has 15 and record is 18 by Travis Zachery in 2000.

 Spiller needs 26 all-purpose yards to become the fifth player in NCAA history to reach 7000 for a career.

 DeAndre McDaniel needs one interception to establish the Clemson season record for interceptions. He has eight and is the co-holder of the record at the moment.

 Jacoby Ford has caught at least one pass in 25 consecutive games he has played.

 Thomas Austin has started 33 straight games in the offensive line.

 Chris Chancellor’s, and Kavell Connor will play their 51st career games this weekend at South Carolina and tie the Clemson record for most games played in a career. These seniors have never missed a game.

Clemson and South Carolina Meet for 101st Consecutive Year  This will be meeting number-107 between Clemson and South Carolina and the 101st consecutive year the two schools have met. That is the third longest streak of consecutive years played in a rivalry in the nation. The only rivalries longer are Kansas vs. Nebraska at 104 games and Minnesota vs. Wisconsin at 102 games. Those games have already been played this year.

 The series dates to 1896 and the first year of football at Clemson, the fourth season for South Carolina. Clemson holds the advantage 65-37-4 since that first meeting in Columbia, a game won by South Carolina 12-6. Clemson’s first win took place the following year, an 18-6 victory in Columbia.

 Clemson has more wins over South Carolina than any other school and those victories represent over 10 percent of Clemson’s all-time victory total (640). When Clemson won in 2004 it was Clemson’s 600th all-time win.

 The two teams played in Columbia as part of Big Thursday every year until 1960. For the 57 Big Thursday games, Clemson had a 33-21-3 advantage. Since the teams have gone to a home and home schedule in 1960, Clemson has a 32-16-1 advantage. Clemson’s winning percentage is nearly identical home and away over that time. Clemson is 16-8-1 against South Carolina at home since 1960 and 16-8-0 in Columbia.

 Clemson won the last time the two teams met in Columbia, by a 23-21 score on a 35-yard field goal on the last play of the game by Mark Buchholz. Cullen Harper completed four passes for 70 yards, all to Aaron Kelly, on the game winning drive.